My dear friend and IHM Sister Margaret Brennan recently published her memoir, What Was There for Me Once

(2009 Novalis) and last week National Catholic Reporter published a review of the book called “A life of change and renewal” (February 19, 2010). 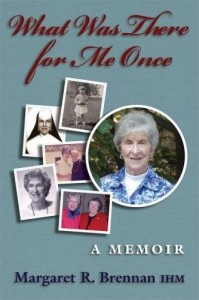 In Sister Margaret’s book, we find not just a memoir but a compelling and insightful story. Kilian McDonnell, OSB, remarks, “Here is a story of a young girl, sister, novice mistress, elementary and high school teacher, president of the congregation, and university professor in the midst of rapid social change.” Sister Margaret “had a major part to play in developing women’s religious, academic, and spiritual lives in the second half of the 20th century.”

Here are a few quotes from NCR’s review of the book:

This preconciliar church experience was fulfilling and made sense to her — and she embraced it. Of religious life as it approached Vatican II, she writes: “While I was entirely happy in the traditional model of religious life as it had been lived for hundreds of years, I was open to the coming changes.”

The Servants of the Immaculate Heart of Mary were among those religious who were quick to internalize the Vatican documents and the new theologians appearing on the scene. “To use the framework of [Jesuit theologian] Bernard Lonergan, I would say that for me the change from the traditional model of religious life to the Vatican II model was a process of conversion. In involved a real change in worldview, in horizon.”

“To keep the question of God — and God’s questions — high on the horizon of the world is worth the gifts of our lives,” Brennan says. And, without a doubt, her memoir attests to this purpose.

There are many things I love about this book — most especially to hear the voice of one of my sisters, one who was instrumental in my own vocation and religious life. I also love the way she writes with grace and a confidence in the providence of God. Sister Margaret also fills a huge gap in the Catholic and popular imagination about nuns and sisters. Kilian McDonnell notes this well writing that the book takes us through “the passage typical of many women’s religious apostolic communities from monastic models to religious forms more in keeping with their original active charism.”

This is a book for all to read, not just those Discerning or interested in vowed Religious life. The historical perspective, told with Sister Margaret’s voice and wit, is marvelous.

Absolutely fabulous book. I could not put this one down.

I just picked up this book at the library during my lunch! I inter-library loaned it after reading about this entry. I’ll be back with comments when I am finished!

I was really delighted to read this book and to hear Margaret reflect on her life (and ours!). Thanks a lot. A great read, and I’ll pass the book on to others.