A Moving Experience with the Nuns

Innovative Nuns
By The Nuns 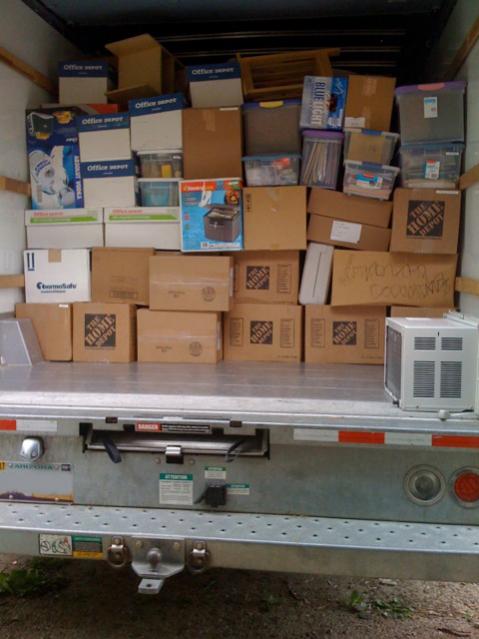 We have always know the Holy Spirit was in the lead of A Nun’s Life Ministry. Our role has been to keep up with where the Spirit is taking us. When the Spirit pointed us in the direction of Toledo, Ohio, we were a little surprised!

Sure we knew that the ministry was expanding like loaves and fishes but we only had one basket! It’s difficult to fit an 8-channel mixer, a 5-drawer steel file cabinet, and 3 desks in a single basket!

So when we started looking for a new space, we went out with an open mind, took in all the possibilities, and found ourselves in Toledo, Ohio!

So really, why Toledo?

Oh, yeah, and a divine office that is the answer to our prayers!

Since our move will take place the second and third week of April, you can expect to see lots of moving footage as well as a couple paint-splattered nuns. We also plan to do a “moving edition” of Ask Sister to capture all the joys and tribulations of moving. If you are on Facebook, be sure to “Like” us at Facebook.com/aNunsLife where you’ll find regular real-time updates. The ministry will continue even through the move with regular blog posts, forum conversations, chat, and Praying with the Sisters.

Please keep us in your prayers as we sort, pack, and move!

Ok…somewhere i missed the memo…You’re moving?? To Ohio?? Are you planning another installment of “A Nun’s Life: Rennovation Edition?” Details!

They may even see Friends-of-Nuns paint splattered as well, but that 5 drawer steel cabinet better have some big sweaty moving guys carrying it this time…

Moving can be fun, when JESUS leads the way there is no turning back. This move is for a good course. I will be praying for you dear sisters. GOD blessing.

Ah, wish I could be of help, dear sisters, but I’m too far to reach those boxes. But I’m happy for you in this move – and do see that it signals growth and opportunity for you in expanding the NL Ministry. So for now, I’ll be your prayer-partner in the moving (much easier on the back!). And I’m happy to know you’ll be nearer to your nuns at the MH.

Knew we had a lot in common but the search for new space is an element I had not included. Your answer to “Why Toledo?” sounds like our answer to those inquiring about our new location which is shortly to be announced. God leads us to unlikely places – the mystery of divine invitation. You know I wish you every good thing, safe travels and safe deliviery. Let us pray for each other.

A Divine Office or a divine office? And why not Ohio? It’s also the holy land of my birth (actually, it’s at the other side of the state–Steubenville.) Happy moving!

I love how you mentioned that you get to say “Holy Toledo” all the time…=O) Not sure what that really means, but it certainly made me smile! I’m so glad I found this web site. I’m in the process of applying to candidacy with the Franciscan Sisters of the Sacred Heart in Frankfort, IL. I will hopefully be accepted and be a candidate this September! Reading these posts and blogs is helping me feel better about this big, and exciting, change! =O) And is making me excited to join a group of women as in love with Jesus as I am! Thank you so much for what you all do and God bless! =O) Please know of my prayers for your ministry.

Congratulations, Mary! We know that Franciscan community through our friend Sister Lovina. What a blessing they will be to you and you to them! We will keep you in our prayers.

Mary — Greetings! I’m an associate of the Franciscan Sisters of the Sacred Heart (Frankfort, IL)! I’ve got a Google alert set for Franciscan nuns. Your message popped right up. I knew from Sister Norma Janssen that one of those women discerning their vocation was gathering all her paperwork. I’ve been praying for you and the others in discernment to the FSSH every day for years. May God be with you as you journey step by step into the life of a Franciscan Sister of the Sacred Heart. These are good and holy women. They’ve been my teachers in grade school and high school. I was an aspirant from 1960-1963 at Sacred Heart High School, which was located in the motherhouse building. Sister Norma and I have been best friends over all these years. Back then, I became a postulant as a high school senior and received the habit of a novice on Aug. 6, 1964 at age 17. We entered early back then. Today I’m married for 41 years to my best friend. And I’ve been a professed Secular Franciscan for 20 years. And it all started with Sister Colletta Hennesey, my 3rd grade teacher. She lives at the motherhouse and is the last of all my FSSH teachers. These women are strong and determined, prayerful and holy, happy and joy-filled. I love this congregation and the individual sisters. Peace and all good!

Okay, I have an Ask Sister question about Nun Locations (disclosed). I’m guessing that the decision making process here was very very different than when I decided to take a job in my city and move there.

Given that, what are some of the thought processes that go into what city you’re going to settle into? Distance from the Mother Ship? Presence of other IHMs in the area? (I met some sisters recently where there were about six of them living in one house, but the order had a couple other houses/apartments relatively nearby so the individual “convents”* were part of a larger community in the metropolitan area that would get together sometimes.) Cost? I’m guessing that real estate is less expensive in Toledo, Ohio than the Chicago metropolitan area.

Given that you can be anywhere, would it have made sense to carve out a portion of the Mother Ship, which the community owns, rather than finding rental space somewhere else? It seems as if most Mother Ships were built for the huge congregations that existed in the early 1960s, and now a ton of them are figuring out how to responsibly deal with All This Space without just selling off their heritage.

How are such decisions made in the context of obedience (understood as discerning in community, not “Mother Superior says ‘jump’, you say ‘how high?’”) To what extent was the decision to move A Nun’s Life from Chicago to Toledo made by Sr Max/Sr Julie, the “mission group”, IHM leadership.

*I mentioned something about coming by the “convent” at a certain time and was told “It’s not a convent, just a house.” Well, it’s quite a big house and 6-8 nuns live there. Is this not the operational definition of a convent? But that’s a separate issue.

Hi KrissyLou! We’d be glad to talk about discerning our moving experience! We put a lot of thought and prayer into this and talked it over with our nuns and friends. Might be able to do it this coming week or next. Will be in touch!

BTW, a couple thoughts on “convent” …. we espouse the idea of where one nun is, there you have a convent. However “convent” can carry with it baggage of the days of hundreds of nuns packed into a dormitory-type situation which may not have been a healthy arrangement. Many of us have dropped language like “convent” because it can harken back to those days, or because it can sound so separate from ordinary life. I personally like to reclaim language like “convent” because it is connected to the rich tradition of religious life and, practically speaking, it gives immediate information: nun lives here. I think however that we need to constantly battle those old images of dormitory-esque living that are no longer accurate or helpful.

Thanks. I was thinking that this could be an interesting window into “how decisions are made in religious life.”

Hmmm, with regard to “house” or “convent” maybe that’s it. Another nun friend suggested that maybe that was their way of saying “we don’t have the Eucharist reserved in our house or any particular one of us designated as the superior.”

Which raises the question, if part of what makes your dwelling a “convent” is an identified superior, which one of you is the superior? I’m guessing Sr. Chloe.

Whew that was long!

The new definition of the Sisterhood of the Travelling Pants?!

So glad to read your moving story, Sisters – because I find myself in exactly that same place right now. My house/convent (interesting discussion above, BTW) is “possessed by a spirit of box” right now as we pack up our lives here and see where God is leading us next. We know the city; we know the work I am called to; what we don’t know is the other things that God is setting up in this city for us. I know I won’t be able to log on to the podcasts for a bit because of packing and moving, but we’d appreciate your prayers for the sale of our house here!

Blessings on your relocation to Toledo (will have to look up and find out where that is…. my US geography isn’t all that flash!). Hope the move goes well and nothing important gets smashed (something will be broken – as long as it isn’t anything too nasty).