Sister Maxine and I attended a screening yesterday for the film “Band of Sisters,” a documentary by independent filmmaker Mary Fishman. Mary’s project took her to our IHM Motherhouse in Monroe, Michigan, a few times and since she’s based here in Chicago, we’ve had the pleasure of getting to know her. 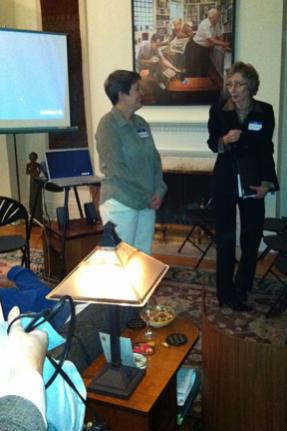 The screening was attended by a great crowd of people, including many Catholic sisters. We saw Benedictines, Sisters of Mercy, Dominicans, Presentation Sisters, and of course, Immaculate Heart of Mary Sisters! Among the folks were “stars” of the film, Mercy Sisters JoAnn Persch and Pat Murphy, and Sister Nancy Sylvester, IHM. Also there was cinematographer Ines Sommers who filmed many parts in the documentary (including a certain convent studio that we all know and love).

Band of Sisters, a work-in-progress due to be finished within a year, is a stunning portrait of Catholic nuns in the United States tracing their journey through the renewal period of the Second Vatican Council up to the present including the current investigation by the Vatican into the lives of these same sisters. The film’s tag line says it all: “Called by Vatican II to renewal and a return to their roots, they shed the outdated rules separating them from the world, put their lives on the line to stand with the poor, and are now in a pivotal conflict with the church hierarchy over who they have become.”

As a woman religious, I am profoundly grateful to Mary for her work and her great care for this project. It is a very real and personal story that allows sisters to speak in their own voice about their lives, their history, and their lived vision now and into the future. Mary herself was educated by nuns in Catholic grammar and high schools. She is also an architect and urban planner with a passion for social justice and filmmaking.

I believe that this is an important time for this film to come out because there has been so much interest and speculation about Catholic sisters in the United States. Underlying some of that speculation has been a confusion about how exactly sisters went from exclusively habited and cloistered and in teaching or nursing apostolates to being a diverse group representing many was to live faithfully the call to religious life. Mary’s film gives viewers a unique lens through which to see how these changes unfolded.

What can you do? Check out Mary’s website Band of Sisters, sign up for her eNewsletter, donate to help Mary finish the film, and stay tuned for movie clips coming to an Internet near you!

P.S. FYI to see a clip of the day Mary Fishman and Ines Sommers visited the convent studio, check out the video on YouTube.

Thank you so much, Sister Julie and Sister Maxine, for your very kind words, and for coming to the benefit and screening of Band of Sisters. It is my pleasure to know you both, and to have met so many other wonderful sisters from different congregations all over the country in the course of making this film. I will be posting a video clip from the film on the website and on YouTube soon- I promise!