At long last the third and final book of Sister Sandra Schneiders's series "Religious Life in a New Millennium" is in my hands! Buying the Field: Catholic Religious Life in Mission to the World is an epic 763-page journey which may end this book series, but which opens up doors into the adventure of religious life!

The first two books of the series are:

This third volume continues Sister Sandra's "rethinking of the traditional religious vows in the context of postmoderism and the twenty-first century, reaching back into the Gospels for the meaning of 'world' in order to discern the meaning of renunciation of the world by religious, examining, the vow of poverty both in its economic and spiritual sense as well as the vow of obedience." (from the back cover) 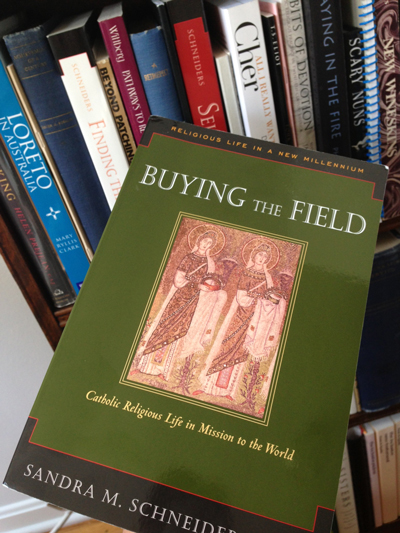 The title of the book borrows from Scripture, which is no surprise given Sister Sandra's scholarly cred as an author and professor emerita in New Testament studies and Christian spirituality.

The Reign of God is like a treasure
hidden in a field
which a person found ...
and out of joy
sold all she had
to buy that field.

The image on the book cover is from a beautiful mosaic in the Basilica of Sant’Apollinaire Nuovo in Ravenna, Italy. It was built in the sixth century. The mosaic (which I have actually seen in person!) is on the left side of the nave and shows two of the 22 virgins in procession toward the Madonna and Child.

I haven't even gotten to the Introduction yet and I'm already enthralled with these images of Scripture and red-slippered virgins!

On a personal note, I am very proud of Sister Sandra Schneiders, who is not only an awesome writer and scholar, but my IHM sister as well!