Yesterday my buddy Carol and I went for a post-work bike ride. It was terribly windy so instead of doing the Lake Shore Trail, we rode through the neighborhood and along the North Branch of the Chicago River. Lots of kids were at the parks, and there were other bikers and runners and dog-walkers on the trail.

It was just great to get out and ride. The other day I had put on new tires for the new season. Old tires were more knobby for real mountain biking, but this summer I’ll be more about road biking. So I changed to something a bit more slick but still capable of jumping potholes now and again. 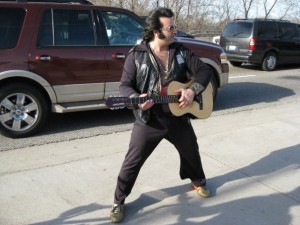 About midway on our ride, we hopped off the trail to head for a Starbucks. It’s then that we saw him … ELVIS!

I rode by Elvis, my heart pitter-pattering …. “it’s ELVIS,” I yelled to all who would hear me … and I waved as I biked by. How awesome is that. Minutes later, Carol and I landed at Starbucks, enjoying free cups of Pike Place Blend (coupons were in the Red Eye). After coffee, we went back to see if Elvis was still cranking out the tunes. Sure enough there he was.

We stopped and chatted with him for a bit. He said he’s known as the Assyrian Elvis in these parts. Favorite Elvis song, I asked? “Mama,” he replied. Elvis comes out every so often, parks on the side of the busy road, blasts Elvis music and plays and sings along. You rock, Elvis!

I SAW HIM TOO! Some people may think he is nuts but he brought a smile to my face. Maybe on your next bike ride you will spot Jesus.

He looks like he’s singing “hunka hunka burning love” -be still my heart… What fun!

I can tell by your photo of starbucks you were “All shook Up”. Sorry I couldn’t resist!