Found this article about Sister Mary MacKillop on Zenit.org

SYDNEY, Australia, JULY 9, 2008 (Zenit.org) – Australia is honoring Blessed Mary MacKillop, who will likely be the country’s first saint, by featuring her on a collector’s coin. 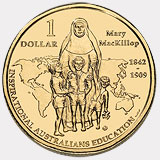 The $1 uncirculated coin is the first of the Royal Australian Mint’s series featuring inspirational Australians, which commemorates unique Australians who have made an extraordinary contribution to the nation.

“As the Australian people’s saint, and someone who could be called Australia’s saint in waiting, Mary MacKillop is a fitting choice for the first coin in the Inspirational Australian series,” said Sherry.

“Mary was an exceptional Australian woman who stands as an example of great courage, trust and compassion, and as our first saint, she will forever inspire our nation,” said the senator.

Mary MacKillop was born in Victoria in 1842.

She founded the Order of the Sisters of St Joseph, the first religious order to be founded by an Australian.

Under the sister’s guidance, the order established schools and charitable institutions across Australia and was devoted to the care of orphans, neglected children, the homeless, sick and aged. She died in 1909.

Sister Julie, Thanks for the article on Blessed Mary Mackillop. She is one of the patrons for World Youth Day 2008 festivities commencing July 19. Best wishes.

mary mackillop was a lovely lady she was an inspiration to our nation. she loved god as do i. Bless you all, Sister Jane

Mary Mackillop will be canonised on October 17 2010 – this news has just been announced!

i have just heard of mary mac killop through my cousin in flordia who is been very ill with parkisons and needs prayer. we were ask to today as a group through e-mail. but was looking for a novena to say when i came across your web. can one say there own prayers or is there a special prayer. i also ask for prayers for my family also my sister who has a problem with her eyes, thank you i found most interesting,