I’m not a big fan of making fun of nuns. No. In fact I detest stereotypes of nuns. Granted, some folks play with the image of nuns in order to have a little Catholic fun and stoke the nostalgic fires. But many, many of these images of nuns are at best cheap shots and at worst degrading and offensive stereotypes.

So today we’ve got an ad by Equinox Fitness Club that ran in Boston magazine. Read about the ad below. Be sure to go to the Channel 5 link and then click on the video in which two Paulist Sisters are interviewed. 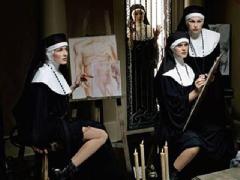 BOSTON — A fitness club ad running in Boston magazine that depicts nuns sketching a naked man has triggered protests among some members of the Bay State’s Catholic community.

The ad for the Equinox Fitness Club is running in this month’s issue and some Catholic organizations blasted the photo saying it was offensive.

C.J. Doyle of the Catholic Action League of Massachusetts said the ad shows contempt for the Catholic religion.

“It says a great deal about this perverse obsession in both the fashion industry and the advertising industry of exploiting and mocking and sexualizing Catholic religious imagery,” Doyle said.

The fitness company responded with a written statement saying, “Our ad campaigns are based on personal motivation and fantasy and throughout history the body has been considered a form of art.”

The Daughters Of Saint Paul said they are taking the high road and not worrying about the ad.

“It is crass, but there are a lot of crass things that I don’t pay attention to. I don’t need to,” said Sister Martha Moss.

“We work in the media all the time and we know that these things come and go and the best thing is to let them go,” said Sister Kathryn Hermes.

The company only has one gym in Boston.

I’ve got a number of thoughts running through my head on this one. First, I want to say that indeed the human body is a form of art. Why should the naked body be shocking? And why would the naked body be shocking to a nun? Hello, we are human and we are able to treasure the human body naked or otherwise. It is quite possible for people, including nuns, to encounter the naked human body in a appreciative, non-romantic, non-lustful, non-”fantasy” way. Have you ever seen Sister Wendy? She’s the art historian that comments on art. She’s done some amazing work with classic paintings that depict the naked body. Watching her explain the paintings and seeing her evident love of art is an amazing thing.

OK, now that that’s been said, I want to say that this ad has nothing to do with appreciating the human body or the human person. While I agree wholeheartedly with the Paulist Sisters who are taking the high road, I’ve got to take one little detour off that road to say that the ad is just bad. Bad taste. Bad spirit. Even bad advertising. ”Work out at our gym so you can get a killer body which will attract nuns.” Is that really the message you want to send, Equinox? Is it worth disrespecting an entire group of women, the Roman Catholic Church, and all decent minded people? Come on. You can do better than that. I don’t question your line about the human body being a form of art.  Would that you would have treated the nuns with as much respect as you treated the naked body of the man.

Here, HERE! I was hoping that you would include the exact very last sentence of your post! I agreed with everything that you said. I “might” have bought that line if they didn’t treat the nuns with such disrespect by depicting them as flirting with the model.

Advertisers disrespect women, in general. Women have to bare much moreof their bodies than men in these types of ads and I am wondering what it’s going to take for female models to do something about it.

I’m sorry, but why didn’t anyone stop and think for a moment that, hey, ya think there might be people who find this offensive, or in poor taste? It’s beyond me that this made it to press! Thanks for pointing this out…

Someone once said, “Sex sells,” Not in this case it won’t. This has to be one of the most poorly-conceived ad campaigns EVAH! (next to those inappropriately raunchy Burger King ads). Don’t get me wrong; I am NOT a prude, but puh-leez! If they have to resort to tactics like this to attract members, it doesn’t say much for their product, does it?

Yes! to all of your points — the ad is not offensive because of the naked man, but because of the depiction of the nuns. We (the Church) have paintings and sculptures of naked bodies all over the place in our churches and museums. No big deal. But the characterization of nuns (and women) in this ad is just terrible. Not acceptable. Arrgh!

I’m with you on this. It is in bad taste (the ad, that is). I love your point, though, about art. I work in a contemporary art museum, and I am both amazed and saddened by the number of people who are appalled by a nude sculpture or painting.

Rude and crude…but is anyone really that suprised? In a land that gave us the iraq war and Jerry Springer? It is sadly interesting that, in the ad, you have a real flesh and blood male but only poorly executed caricatures of nuns. Does this mean that the real women who frequent this gym will leave as pseudo-women?

I think these advertisers just wanted to get a rise out of people, you know, get their attention. The problem is that they aren’t really making any valid marketing point. Are they making fun of nuns? Perhaps a little. But the whole thing is so weak that it doesn’t even seem to matter.

I don’t feel many people, nuns or not, would even give the ad a second look. The Daughters of St. Paul interviewed don’t seem to be too bothered.

I fear that Equinox might find they have even offended some of their current clients…This just might come back and bite them in the “back of the neck”.

And, yes, I have seen Sr. Wendy. She’s a pretty good art historian…at least I could understand her explanations. She was great fun to watch each week.

Thank you, Sister! You put it in a way that makes total sense.

You’ve made a very distinguishing point — it’s the nature of the ad and the way it uses “nuns.” It mistypes and misrepresents consecrated celibacy and dehumanizes “nuns” as objects to be poked fun at. I’d like to know who approves these things and how many layers of approval have they gone through. I’d encourage folks to contact CNN. They had interviewed the two Sisters and all that made it to the news report yesterday were two sentences from Sister Martha which out of context did not do justice to the story or the depth of their analysis.

Thanks for linking us to Sister Anne’s blog for the more complete version of the Paulist Sisters who responded to the ad. Sister Anne directly contacted the two sisters interviewed.

Among other things, Sister Anne noted that “the sisters prayed, sought advice, prepared and took the risk of accepting an interview, despite the fear that what they said would be taken out of context or reduced to a senseless sound byte.” This is truly what it means to take a prophetic stance. Thanks, Sister Anne for bringing this to us.

And a big “yes” to your observation, Sister Anne: “Personally, I want to ask why nuns have become the comic relief of pop culture. Is it an attempt to cancel out the witness to a life of purity? Does it represent fear of the invitation our life expresses? (After all, we are meant to be an eschatological sign!)”

I think you’re missing the point. It’s not about nuns. It’s about fantasy. About what an individual’s fantasy might be. Look at the other ads in the campaign and tell me I’m wrong. It’s neither an attack on nuns, nor the Catholic religion. People take things out of context. I would suggest not letting yourself get riled up. And if you really want to do something, ignore it. All this publicity does nothing but promote the club to it’s core audience. You could always boycott Boston Mag. Or petition outside the club. Or go on tv and complain. It’s all good news to Equinox. I’m just saying. Playing devil’s advocate. Thanks for the air time.

Nate, The intention of the ad may well have been fantasy (as Equinox states) but whose fantasy are we talking about? A man’s fantasy to be lusted after by nuns? Just because a fantasy may be real to a person doesn’t mean it should be published, especially when it does a huge disservice to individuals or groups of people. While Equinox may not have meant to disrespect (or attack as you put it) nuns, they certainly did us no favors. Ask anyone in the general public what their image of a nun is and chances are Whoopie Goldberg in Sister Act will be one of the images mentioned. So that’s why I can’t ignore it, Nate. Yeah, blogging about it may give Equinox more press, but it also makes a statement that it is unacceptable to stereotype nuns, disparage nuns, or inappropriately make fun of nuns.

I know you are playing devil’s advocate, and I do appreciate it, Nate. My comments are less to you (who expressed your views very respectfully — which I in turn respect) and more to folks who just think it’s perfectly okay to falsely characterize nuns. The sad truth is that these characterizations stick in people’s minds and they are often more comfortable with fake nuns than they are with real nuns that might actually talk back.

As I mentioned before, the ad is so weak it doesn’t even seem to deserve or merit much attention. That being said, it has offended people. That is the reality. And I can understand it because nuns are so often stereotyped.

As I thought about it, I began to wonder what would happen if this ad depicted imams, women in burkas or African Americans in a stereotypical/negative light? There would be hell to pay and lawsuits galore.

Once again, the sad truth is, that in this country, it is okay to mock Catholics (nuns seem to be a favorite) . It’s politically correct. But don’t try it with other groups.

Although we might not want to draw attention to the ad, perhaps it’s not a bad thing that people know nuns will defend themselves. They know how. They often defend other people, sometimes risking death.