The Cross: Not just a fashion accessory or architectural

Prayer and Spirituality
By Sister Julie 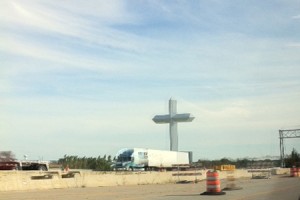 I have been thinking a lot about what it means to express our beliefs publicly after Sister Maxine’s post yesterday about billboard morality. Though a billboard is truly an awesome way to declare one’s faith and values, the cross is the “typical” visual way we do this on a day to day basis.

Too often the cross has been reduced to mere fashion accessory (not that fashion is a bad thing) or an all too familiar Christian image that barely registers on our spiritual radar. It sometimes takes a very unusual depiction or placement of the cross to make us think twice about what the cross means. For me, that unusual moment came in the form of a giant 198-foot steel cross off Highway 57. “The Cross of the Crossways” is apparently the world’s largest cross and it is located right here in the midwest in Effingham, Illinois.

Thrusting heavenward out of easy-to-reach flat farmland, the cross seems even bigger than it already is … The massive slab into which it’s anchored is awash in piped-in church music and surrounded by monuments for each of the Ten Commandments, which deliver inspirational audio homilies at the touch of a button.” (source)

I’ll tell you, that cross not only took my breath away for it’s sheer magnitude but also for the amazing witness value. Maybe it was built for that person driving down the highway and who is in a rough space and in need of a sign … imagine the shock as this cross appears on the horizon. 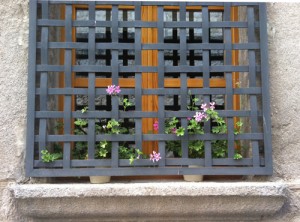 One might think that as a nun, I’d have more opportunities to see crosses and crucifixes. But being on mission in the midst of the worlds means I experience life just like other folks do. But “hidden” crosses are all around us! “Hidden” crosses are those glimpses we have where a couple tree branches randomly form a cross, an architectural pattern forms a cross, etc. Here’s a photo I took while in Avila over the summer. Do you see the cross? I remember reading somewhere that Saint Francis of Assisi would always see these “hidden” crosses all over the place and use the opportunity to say a quick prayer. I am going to try the same!

Another story about St. Francis and the cross is that he would frequently make the Sign of the Cross over himself, as large as he could make it, so that he could carve the cross on his heart. And looky what happened to him on September 17, 1224–he received the sacred marks of the stigmata, the five wounds of Jesus.

Because the land around the cross is so flat, you can see the cross from a long distance away. I’m just glad I don’t have to carry that cross — it must weigh several tons!!

As a child my bedroom window was warped somehow and when it was a full moon each month a beautiful cross would be reflected in the window. I can recall waiting for the moon to be full to see that cross and being so delighted by it. I was so thrilled when I was home the other day (I am a 48 year old mom of 2 now) and the window still did it. I can still recall the warmth and comfort at that lunar “cross showing” in my childhood bedroom window. I loved your post about noticing small and unusual crosses. I’ll have to look for those.

I’ve often told my students that “You’ll find what you look for, so look for joy!” A friend of mine has the last name Abbott. He collects images of the letter “A”, which he often finds in the strangest places. Last winter, with the temperature hovering around zero, I got a photo of a sunset with a huge spike above and below the sun, and a crossbar just at the horizon. Julia saw it and said, “Look! It’s a cross in the sky!”

And the huge cross in the field reminds me of the huge fuss that went up when the Mormons built a new temple atop a high hill in Belmont, MA. They put a huge, gilded statue of their angel Moroni on top of the steeple. It is visible for miles around, especially from the Catholic church almost directly across busy Route 2. Some are still grumbling about it. And what if that gigantic cross in Illinois were, instead, a Muslim crescent? Or a huge Buddha? How would people feel about it? What would happen?