A Sister Candidate on applying and becoming a nun

A Nun’s Life Ministry welcomes guest blogger Diane Brown, who recently was accepted as a candidate with the IHM Sisters of Monroe, Michigan. Today, Diane talks about what it was like to formally apply for religious life and how it feels to begin candidacy. In yesterday’s post, Diane described her experience of discerning a call to religious life.

Applying for religious life, and becoming a candidate, by Diane Brown

After more visits to Monroe, I finally became a Catholic (although I had attended Mass with my father, I had never taken the necessary steps), and I made first contact with Father Kelly, a Jesuit who took on the job of my spiritual direction. Through Father Kelly, I began a more formal and conscious prayer practice and began, in a small way, reading about prayer.

Then, things got serious. I began traveling to Monroe every Sunday for Mass and to visit with the retired sisters. I couldn’t imagine a more welcoming bunch of women. And smart!!! And still very active in righting the wrongs in the world.

At first, it seemed like a mountain too tall to climb. To put my home, educational, and religious story onto paper, knowing that this story had to be 100% honest and knowing that it would be read by nuns, was overwhelming.

After I finished, things happened quickly — physical, dental and eye exams, psychological exams, and six interviews. I felt it was probably easier to become a CIA agent than to become a sister! 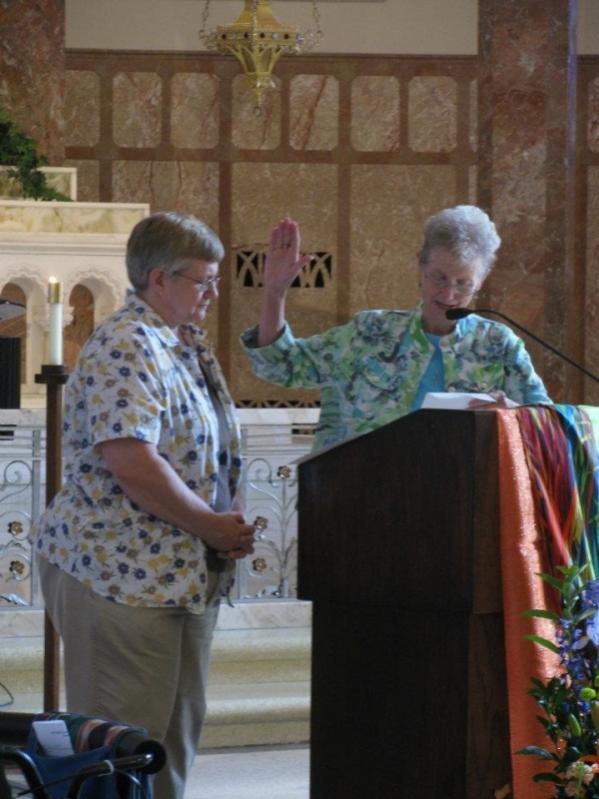 Finally, the first big day — a Mass at which I would be formally recognized by the community as a candidate. I stood before the congregation prior to Mass, and all of the sisters reached out a hand to pray for me. It was overwhelming and joyful.

Then, right before the Mass ended, the priest asked to speak to me. I was afraid he expected me to stand up. There was no way I was going to rise.

Finally, after searching the congregation for my face, he began to speak. He said that people enter religious life thinking that they already know God’s plan for them. He said it was important to drop this pretense and just live in the moment.

What a charge — probably the most helpful direction I’ve ever received.

In my case, candidacy will be between one or two years. I hope to be able to write here regularly and to share this journey. I invite you to come along.

Thank you Diane, for sharing your journey. I am in the process of discerning so your posts are giving me some clearer picture of what I will be going through. I look forward to reading more!

Thank You for sharing Diane. I am on a similar journey. And I am looking forward to the next steps in mine. Hoping to share them as well in the hopes it will help other women contemplating taking this journey later in life. What a blessed time. Keep us posted as the journey progresses

Diane, I was in chapel the day the the presider made those comments to you. Actually, the message applies for all of us to ‘live this moment’ knowing God is right there beside us hinting, cajoling and supporting each choice. I join you in this exciting and transformative journey. Joyce, IHM

Again, I love this so so much Diane. It’s a honor to be a part of your journey!

Thanks so much for your reflections in yesterday’s and today’s blog posts. Food for thought for all who are discerning major life commitments!

Thank you Diane, for sharing your journey with us! Congratulations to you for answering God’s call and congratulations to the IHMs for taking the risk with someone in their 50′s. I look forward to hearing more in the future. Namaste!

Hi thank you Miss Brown, I am very glad to have been able to read your post. I am very young, not even 16 yet, and I really want to become a nun. My parents are catholic but they aren’t too fond of the Idea, in fact when the topic of careers come up they want me to become a teacher, Doctor, or a Journalist on the news. they want me to go to college and have a fulfilling career. My siblings want me to get married but I cant even think of such a thing when I want to be a nun so badly. I have known for years that I want to become a nun and I was wondering, how do I let my parents know?