While surfing around the Internet I came across the mini series “Body & Soul” which was shown on Public Television Stations in 1993. Here’s a plot summary: 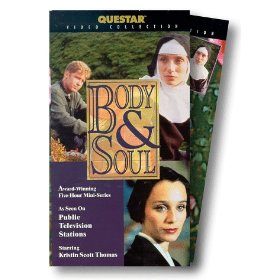 A nun, played by Kristin Scott Thomas, leaves the convent temporarily to help save her family knitting mill from bankruptcy following the death of her brother. Outside the convent she becomes a fairly shrewd businesswoman and feels attracted to one of the men who work at the mill, and thus begins to feel conflict about her religious vows. (Amazon.com)

As many films about struggles that nuns face, this one ends in Sister Gabriel leaving the convent. The plot does actually sound rather intriguing though I’m not sure how well it accurately conveys religious life. Has anyone seen this mini series?

What I really like is this bus station poster advertising the mini series. It shows a nun in full habit showing some leg … I guess the artist intended it as symbolic of the nun’s struggle or to show that she is still a woman underneath the nun garb.

I’ve never heard or seem that miniseries but that plot is similar to a book I saw in Barnes and Noble the other day… I wonder if its the book version of it?

You’re absolutely right, Kristin … after I read your comment I searched Amazon books and found that the mini-series is based on Marcelle Bernstein’s book Body and Soul (published by Arrow/Random in 1992). From what reviewers say, the book was a lot better than the TV mini-series. I may pick up a used copy of the book and give it a read. Thanks, Kristin!

Wait…I *think* I may have seen it. I may be confusing it with “Brides of Christ,” though. Does the last scene involve her leaving her ring and walking away?

Meh. Would be nice if there were a movie of women religious making the decision to stay with it. If it’s the one I saw, I’m not sure how close it is to religious life…I got interested in the Benedictines and Trappists a bit after that, during my first year of college.