A new documentary about Catholic Sisters and Nuns has just been released. Interrupted Lives: Catholic Sisters Under European Communism is a one-hour documentary that “explores the experiences of Greek and Roman Catholic Sisters of Eastern and Central Europe sisters who at the end of World War II were trapped under Soviet domination as Josef Stalin seized control.” (source: USCCB press release) 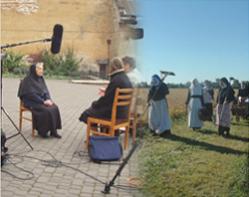 The documentary will be released to ABC stations and affiliates later in September. Visit the film’s website, interruptedlives.org.

The executive producers are Sisters Margaret Nacke, CSJ, and Mary Savoie, CSJ, both Sisters of Saint Joseph of Concordia, Kansas.

The sisters realized the urgency (because of the age of sister survivors) of interviewing sisters who had “endured imprisonment, exile to Siberia, forced farm and factory labor, deportation, seizure of their schools and hospitals and expulsion from their convents.” (source: USCCB press release)

Preserving the stories of the extraordinary courage and unwavering commitment of these sisters is important historical data for the archives of the Catholic church.  Every effort was made by the Soviet communists and their satellite countries to suppress all activities of the sisters, depriving them of ministries that would in any way influence others and placing them in works that would negate any contact; therefore, whether on farms, in factories, caring for the elderly or incarcerated in prisons, sisters seemed undeterred in living their faith. (source: Sisters of Saint Joseph, Concordia, Kansas, February 3, 2009)

For more info on the making of the documentary, check out the Sisters of Saint Joseph link above and a 2003 article by Margot Patterson for the National Catholic Reporter “Preserving the gospel stories of today: Project seeks to record Catholic experience under communism” (September 19, 2003).

There are those amongst us who were able to view this situation dramatized on American early TV on the classic Playhouse 90. The episode was called ‘The Deliverance of Sister Cecelia’. I am sure that it is archived somewhere. Those of us in IHM grade schools at the time were mandated to watch and report!

The Sisters who taught me in high school, the Daughters of Divine Charity (FDC), have a province in Hungary and lost Sisters — sometimes violently — during the Communist era. It is important that this history comes to light.

I hope my local channel picks this up!

There was a nice article two or three years ago in the St. Anthony Messenger about Sisters Margaret and Mary’s work on this subject. I am glad to know that the documentary will be released soon. It has special meaning for me because the Sisters of St. Joseph of Concordia taught me in grade school, and also when I attended Marymount College in Salina, KS (it has since closed).

I have worked with these two sisters as a consultant on their larger project, as well as the documentary. They have also presented discussion of their work at the History of Women Religious conference(s). This is a very important project, and Mary and Margaret are definitely to be commended for all their efforts!

I hope this film will be broadcast where I live. I’d love to see it. Thanks for informing us. Dee

Victor, I knew Sister Cecilia personally since I was a young girl. She truly was an extraordinary woman, and Nun. It is so very important that her story be told and those of Religious women like her, such traits of character are rare today!

I am looking forward to seeing “Interrupted Lives: Catholic Sisters Under European Communism”. My community, Sisters of Social Service, was founded in Budapest, Hungry in the early 1900′s. We have a Federation of SSS including Eastern Europe, Canada and California. I believe Anne L. of the Hungarian District is one of the sisters who was interviewd for this documentry. We had the honor and pleasure of having Anne share with us this past summer as she directed one of our 8-day community retreats in California.

Blessed Sara Salkahazia, SSS was beatified just a few years ago for her heroic example, ministeryand execution under the Nazi/Arrow regime. Maybe it is because I have come to know and befriend some of the sisters who have experienced the Nazi and Communist surpression that I am encouraging EVERYONE to view this important document of Women Religious– or maybe it’s just having the Roman Apostolic Visitation at our doors— I don’t know—but, somehow the Spirit is reflected in the example of the many courageous Women Religious who suffered so deeply under the Reign of Terror and it is the same Spirit who is alive and well in the Women Religious of the US undergoing the Roman Apostolic Visitation.

I saw this film yesterday morning! It was fantastic. I’m trying to purchase a copy to use in my classroom when I teach the effects of Communism on the Catholics of the Eastern Bloc Nations. I teach Social Studies in a small midwestern city. 6 – 8 grade – it is so appropriate.

This sounds great, hope I can get a chance to see it. On a side note I am related to Sister Cecilia from the movie and the book. I never saw the movie (can’t find it). But it was such a moving book. I wish I was able to meet her before she passed.

A very poignant documentary! The sisters that endured the many years of imprisonment are a testament to the strength and fortitude of women. They are excellent role models for all women today. I am looking for an address to contact Sr. John Vianney who was a speaker in the documentary. I was a student of hers at St. Piux X High School, Pottstown. I’m hoping you can help me. Thank you.

To Colleen who wanted Sr. John Vianney’s number. If you look on the internet for Sisters of Cyril and Methodius, Danville, Pa you can get her address.

To Sheila who wanted information for her classes…look at Interruptedlives.org. There is a study guide that could be altered for lower grades.

Peace and “spread the word”

Thank you ABC for showing us the story of our Eastern European Sisters.What a heart wrenching story.There must be a God otherwise we could not endure such misery in this world. My prayers go out to the Sisters.

Thanks ABC for airing this story. I would like to get a copy of the dvd. Any idea where to get one? Very inspiring. As a 1st generation Hungarian, it really struck a chord.

Hi Louis, thanks for writing. I ordered a copy of the DVD through the producer, the International Broadcasting Commission, of which the U.S. Catholic Bishops are members. Also check directly at the Interrupted Lives website.