Where is God Calling You?
By Sister Julie

When I was in my first formal steps of becoming a nun, I thought I would never stop hearing the question, Why are you becoming a Catholic sister? Some 15+ years later I still get the same question though I'm perhaps a bit better equipped to respond articulately. 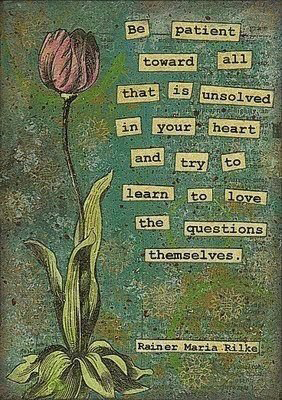 While there were some days I had no idea what I was doing, each time someone asked the question, it gave me a moment to take my discernment pulse. It was like a quick status report and sometimes from there I'd launch into a deeper reflection, some freaking out, serenity, and then some more freaking out.

Did I mention that freaking out was a regular feature of discernment?! :)

But I guess it's sort of like that with figuring out your calling, your path in life -- or at least the current segment of the trail. We pass through some interesting terrain -- smooth roads, wilderness, "trail closed" signs (that happen to have a narrow bike-sized opening nonetheless), naysayers, being "in the zone," and many unexpected encounters along the way.

All those inquiries about why, WHY are you becoming a nun -- along with the related "What? Celibacy?!", "Does that mean we'll never see you again?", and "Does this mean you are married to Jesus now?" -- were parts of figuring stuff out and being able to respond to the questions first and foremost for myself and then of course for those around me.

So whatever you are discerning or on whatever place in your journey, be encouraged! Questioning is good – see what insights the questions hold!