Monday Quiz: Find the derisive stereotypes of nuns in this article

Just when I think stereotypes and negative portrayals of Catholic sisters and nuns can’t get any worse, I read something like this review of Sister Act the Musical. No, no it’s not the musical that is problematic. It’s the review. 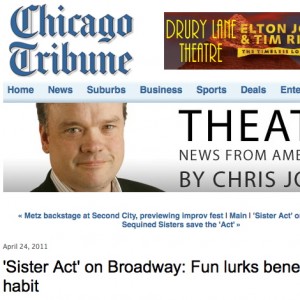 Like Mormons, nuns are ideal subjects for musical theater. They seem likeable and wholesome, exotic yet familiar, and inherently optimistic. They sing in harmony as part of their daily routine. And there are endless chances for variations on a long-proven gag that was around way before “The Sound of Music”: tickle or test a nun in some way and you’ll find a far savvier, racier and worldlier creature than that drab habit would lead you to believe. Musicals need a repressive exterior and something deep that’s aching to pop out. Nuns make ideal sense.

NOTE: When this review was originally posted (it might be removed by now), it had this headline: “‘Sister Act’ on Broadway: Fun lurks beneath the habit”. Shame on whomever put that headline there but kudos to the Trib for taking it down.

Because I can’t bear to read it again, I thought I’d share my pain with you via a quiz.

I await your wisdom. In the meantime, I must return to my singing and repressed exoticness.

Thank you for speaking out on the stereotypes which seem to stick to us like glue! Maybe we can make repressed exoticness work for us….. Keep up the great work!

If that were a stereotype drinking game, I’d be completely drunk by now. And I can hold my liquor.

Ahhh, poetic as ever, Jen!

“Cuteness” is probably one of the most damaging of stereotypes, because it trivializes the role of the person, and, by extension, the person herself. How could there possibly be a prophetic depth to an “innocent (read “ignorant”), repressed, giggling (or frowning), dancing doll? Grrrrr!!!

Not fond of the cuteness either.

certainly many nuns are perceived to be one way and turn out to be another. i’ll agree with the author on this point: there is often much more to a nun than immediately meets the eye. he didn’t mention any of those things: fierce loyalty, fearless pursuit of justice, humor that goes way beyond knock-knock jokes, love that transcends, and a recognition of something greater than us all.

You make a good point about the author’s observation that there is more to a nun than what meets the eye. And that would have been a great place for him to expand into some truly compelling stuff.

I have to admit that I wasn’t, at first, particularly shocked by this review, but then, I’m not a nun. Mostly, it reveals the reviewer’s superficiality (original word, “stupidity,” but let’s be kind here) and lack of knowledge about real sisters. Maybe we should invite him to join an “A Nun’s Life” podcast to let him see what nuns and their friends are really like? Certainly, we could disabuse him of any notion that nuns are exotic creatures who always sing in harmony! That said, my first response was, “Since when are Mormons funny? And what is the connection between Mormons and nuns?” I’ve also been much more incensed at the stereotypical depictions of nuns in the Archie McPhee catalog than at this review. But I digress. In the book Lying Awake, Sr. St. John of the Cross muses that the habit, which originally was meant to help the wearer blend in and be inconspicuous in society, now serves as a beacon that makes her stand out in society. Such beacons naturally arouse curiosity, and, in the view of the ignorant, derision. At the same time, the habit depersonalizes the wearer, making it oh, so easy to take a pot-shot. Ultimately, I doubt whether many people paid much attention to his opening paragraph. It was a probably unintentional cheap shot at humor. I just hope he doesn’t make a habit of starting his reviews that way!

I’m not very impressed with Sister Act. Isn’t that the play/movie where Whoopie Goldberg involves some “nuns” in an adventure. Seemed the thing was picturing nuns as gullible “children” who need Whoopie to complete their lives.

One of my favourite “nun movies” was shown in the 1960s and I can’t remember the name of it now. It was about a community of nuns during the Nazi occupation of Italy (I think). These nuns risked their lives by taking in/hiding Jewish children, and used all their strength and wiles to protect them … without Whoopie’s help. No silliness here, just the courage, dedication, and faith I experience with so many other sisters.

I think the movie was “Conspiracy of Hearts”….

“I must return to my singing and repressed exoticness.” Thanks for the belly laugh! What’s funny is I can match up nuns I know to characters in Sister Act (the movie, not the stage version)–the naive & clueless, “cutesy” nuns, totally skipping by the majority of the nuns who are the leaders and visionaries, the advocates of the marginalized, the workers in the trenches, and the rest.

ster, i see those nuns, too, but in those aspiring to the sisterhood, not in anyone who has actually professed vows. there are the dead-on, truly intentioned aspirants out there–tons of them–but too often i see the deluded, too-pious, and the downright immature i-believe-in-hollywood-nuns, too. they are the ones that make me hope weeding is up to par in congregations today and that a need to meet a census doesn’t overwhelm common sense.

I would guess he is refering to Donnie and Marie Osmond, who do sing in harmony and can be funny. But still that does not make matters any better.