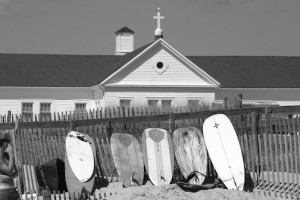 Yesterday marked the 11th annual Nun’s Beach Community Day and Surf Invitational in Stone Harbor, New Jersey. Nun’s Beach is located in front of Villa Maria, the Immaculata IHM‘s convent. I had the privilege of staying at Villa Maria for a long weekend. The sisters that live at Villa Maria told me about the Surf Invitational on the beach. They seem to enjoy the fact that surfers use the stretch of beach and surf in front of their convent. Surfline.com describes surfing at Nun’s Beach:

Decent, lined-up surf, both lefts and rights. Nun’s is located in front of the convent on 114th Street* and is especially fun on a good, head-high northeast swell. Surfing is restricted during the day in the summer, but the north side of the jetty is open to surfing all day. Beach tags are required. The surf is shared by enthusiastic longboarders and young wave-warriors. Lots of surf moms and dads teach their kids to surf here. (*Note: correct address is 111st and First)

Every year a new logo for the surf invitational is designed. These are highly-coveted collectible items. When I was there, the logo had a nun in full habit surfing the waves. At a sidewalk sale downtown Stone Harbor, there was a booth full of people (including nuns) selling the awesome t-shirts et al. 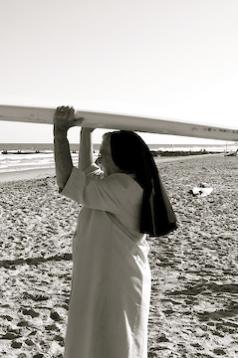 While I was looking up Nun’s Beach on the Internet, I came across some beautiful pictures by the talented photographer David McCarty. He was kind enough to let me use them for A Nun’s Life (for which I am most grateful). The top picture is stunning. It shows some boards up against a fence with Villa Maria in the background (note the bird on the top of the cross). A great shot. The other two pictures are of Sister Maria Loyola* at the 2005 invitational (*Note: originally incorrectly identified as Sister James). 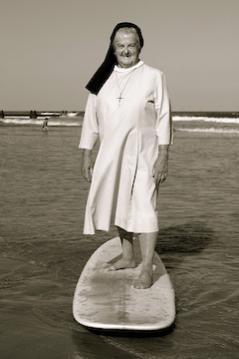 According to David, Sister Loyola was 80 at the time and the head of the convent. David notes that Sister Loyola claimed to have a lifelong dream to be able to surf. This is pretty close! Visit the Immaculata IHM Web site. Also, check out the David McCarty Photography Web site.

UPDATE: 08/15/2008 – normally I don’t edit my posts, but given that the mixup in names continues to cause confusion, I’ve changed references from Sister James to Sister Maria Loyola … see comments below for the whole story.

The information about the nun pictured is incorrect. The pictures are of my great-aunt, Sister Maria Loyola, IHM.

Really? I got these directly from the photographer. I’ll have to check it out. I want to be sure that Sister is correctly identified. Many thanks, Andrea, and if you have any additional info, please let me know. Sister J

Hello Sister Julie, Yes, my great-aunt, Sister Maria Loyola, was chatting with the surfers and others in attendance and had expressed an interest in surfing. Spending parts of her summers at the retreat house in Stone Harbor for years, she had watched the surfers from Villa Maria’s porch in the evenings. She changed into an older habit and at the youthful age of 80 was finally on a surfboard (she was born in March of 1925). These pictures circulated quickly as one of the other sisters in her convent received this picture on a Christmas card 2 months later.

Dear Sisters, I recently saw a t shirt advertising your surf event. I wonder if these are for sale? I have three Carmelites who would love them. Thank you!

Hi Father Flaska, The IHM Sisters of Immaculata, Pennsylvania are the Sisters on whose beach the Surf event takes place. You can find contact info for them at their website. They’ll be able to tell you whom to contact for the t-shirts. Thanks for the inquiry!

Andrea is correct. I gave you faulty information. I apologize. The picture you have of the nun on the surfboard is Sister Loyola and she is NOW 82. I was given bad info. Sister James is the head nun at the convent in Stone Harbor. I had the good fortune of shooting her again this year.

Good to hear from you again, Dave. Your new pictures are fabulous. You have a very good eye for beauty. Sister J

I’m one of Sr. Loyola’s nieces and I thought everyone would want to know that she passed away this Sunday, August 31. She was surrounded by family and friends and went home to be with the Lord and our family members who have gone before her.

The family has gotten a lot of enjoyment out of these pictures over the last few years. It will help us with our good memories of her.

I was informed this morning by her niece that Sister Loyola passed away yesterday after a brief fight with cancer. She will be surely missed. Especially since next Saturday is the 13th Annual Nun’s Beach Surf Invitational and it would have great to have had her there cheering us on.

Janet and David, Thank you for letting me/us know. I am so sorry for your loss. It has been a pleasure to know Sister Loyola via these pictures and the uncovering of her identity! My prayers are with you and your family, Janet and Andrea, and with the IHM Sisters and all who were touched by Sister Loyola, including you, David. Blessings.
Sister Julie

Thank you for the grat write up about Sister Maria Loyola. We entered the convent the same time. What a wonderful friend and sister she was. I had a great time with her this summer at Villa Maria and happy to have a wondeful visit with her Friday before the Lord took her to Him on Sunday. I was at her funeral and what a beautiful sight t see the school children she taught as a honor guard in the chapel.Blessings to all of you. Sister Maria Francina