On Reading the Book “Double Crossed”

How to Become a Nun
By Sister Julie 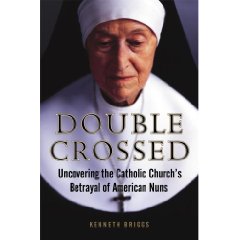 I’ve finally begun reading Kenneth Briggs’s Double Crossed: Uncovering the Catholic Church’s Betrayal of American Nuns. Doubleday, the publisher, has not made it easy to want to pick up this book and read it. The title of the book is a bit too sensational for my tastes, and the cover art of a nun in full habit looking like she’s just been betrayed big time is definitely a turn off. But, nevertheless, I persevered and was able to move beyond the first few pages. The preface begins with the following:

No figure has etched a more indelible impression on the nation’s psyche than the nun. A vivid picture of the sister wrapped in a mysterious bundle of wool, with only a cameo of her face showing through, remains deeply imbedded in the mind’s eye of Catholics and non-Catholics alike. Sisters are the stuff of legend, fixtures in a cascade of plays, movies, television shows, Xerox comercials, and endless kitsch. (Preface, ix)

Having grown up in the post-Vatican II era, my encounters with those “mysterious bundles of wool” were few and far between. For me, the mystique of sisters was equal to that of police offers and fire-fighters in full garb, university professors in academic regalia, nurses in their scrubs, or martial artists in their traditional gis (uniforms). They represented people whom I was in awe of — whether because of their healing abilities, athletic abilities, broad knowledge, or courage. As a kid, I may not have wanted to do the kinds of things they were doing, but I did want to be the kind of person I perceived each one of them to be. The same is true of the nuns I knew. I admired these women of faith, witty humor, wisdom, and prayer. For most of my life, however, I never wanted to be a nun; I just wanted to be that kind of person. And lo and behold I find myself an actual nun now. It seems that the whole package suited me (I still find that surprising). Not that I am all those things, but I choose to mark my life by my pursuit of those things. For me, I am becoming more and more myself through this path. Indeed, religious life has been for me its own little “mysterious bundle.”