A Nun’s Life community member Julia writes about training for a marathon. Whether you are a runner or not, how might Julia’s words apply to a situation in your life? What bits of wisdom shine out for you? 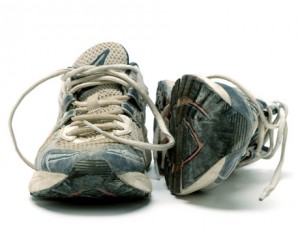 A few weeks ago, I started to feel a little run-down. I didn’t think much of it; I kept working and kept running. I got a sore throat, lost my voice, started to cough, and continued to feel pretty awful, but I was so busy that I managed to push it out of my mind and motor through. After all, I had a 7 mile run to tackle; who had time to wimp out? No pain, no gain, and all that.

When the fever hit, I made it two days before making a doctor’s appointment, since it was clear that this–whatever it was–wasn’t going away. A few hours later, I had a prescription for a hefty dose of antibiotics and a diagnosis of pneumonia. (In retrospect, I suppose that explained quite a bit.) My doctor ordered me to take two days minimum off of work. I sheepishly agreed, but then she dropped the bomb: “…and NO RUNNING until you’re back to your baseline.” (Um, excuse me?) In a trembling voice, I asked what she meant by “baseline”–were we looking at a day? Two days…a week? “It all depends on your recovery, but we could be looking at up to two months,” she replied.

Just like that, my carefully crafted plan fell to pieces.

Numbly, I thanked her, gathered up my things, and left. As my brother drove me home, I thought about my training. How could I run a marathon if I couldn’t work out AT ALL for two months? What was I going to do? I hated the thought of scrapping my plan; it was a good one, and I had been working really hard. True, my recovery probably wouldn’t take two months, because my immune system was doing its job nicely, but I couldn’t afford to waste any time.

I went home and parked myself on the couch for a week. I couldn’t walk up a flight of stairs without resting three times–30 seconds after standing up, I had to sit down again. Once I was on the mend, my body flat-out refused to work past its potential, and (luckily) I was so scared of getting sick again that I listened. If I was tired, I skipped my run and took a nap instead. I did what I could, when I could, and tried to work from there. Despite my compliance, I was full of anger and frustration over my situation. I couldn’t seem to make sense of my new circumstances, no matter how hard I tried. I’m a 24-year old distance runner who eats well, drinks tons of water, takes vitamins, gets lots of sleep. I was doing the right things for a good cause. How could this be happening?

After letting my negative thoughts ruin my attitude for a few days, I took the advice of a friend, stepped back and took stock of the situation. I had been given another chance. I was still healthy, my body had done its job, and a disease that could have killed me was working its way out of my system. I might not be able to run the marathon I wanted, but could I run a marathon? Absolutely. I hadn’t lost much of anything except a bit of time–and my temper. In the process, I learned a valuable lesson in curbing my tendency to be a bit, shall we say, “controlling.” I needed to hold on to my hopes with an open hand, just in case God had other plans. I’m happy to say that I feel MUCH better now, and I’m still on track to run the Ann Arbor marathon in June. I’ve also learned an important lesson about God as sovereign, one that I will work hard to carry with me.

What experiences have you had in which God’s plan didn’t match up with yours? What did the experience do for you?

Read all of Julia’s posts as she trains for the Ann Arbor Marathon.

I remember back in late July 1977 I was 3 weeks from going to my freshman year at what was then Clarke College in Dubuque, IA. I had it all planned, I was almost packed, I had expectations, I knew what I was going to be doing! And then SURPRISE! I was moving a little to quickly in the rain and ran down a flight of stairs and fell – and shattered my left ankle. Spent 5 days in the hospital and another week at home trying not to panic about going to school. I eventually got there, but in a wheelchair with instructions not to put any weight on my foot.

Asking for help was not something I was good at and asking for help to have someone push me in the wheelchair to classes – just about did me in. I felt totally lost, and useless. After 3 days of doing this and feeling hugely sorry for myself – our resident assistant – Sr. Elizabeth Anne Coffey paid me a visit. She caught me at a time I had been crying. And she basically conveyed the message that she thought I was not the type to just quit and throw in the towel. She also left me with a very strongly delivered message – ASK FOR HELP; by doing so I would give others an opportunity to serve God. And while giving others the opportunity to serve, I would be learning to trust that God would take care of me.

Its been a long time since that freshman year. But I still remember Sr. Elizabeth Anne and her message to me. And each day that goes by I try to make sure I see all those opportunities to serve God and do! And yes, my trust in God has grown and I know that I am loved. I will be on crutches again in the near future as I am having my right hip replaced in late June. I am counting on Sr. Elizabeth Anne to be walking by my side reminding me to give others the opportunity……and that its more than ok to trust that God will help me make that next step, and next …..

When I half way through my senior year of high school, I was diagnosed with an illness I’ll deal with the rest of my life. I was terrified, and immediately thought my life was finished. As that week wore on, I went on a retreat with a community that I fell in love with. I emailed their vocations directoress and was told in a very cold way that I “[could] never enter. you’d never be able to keep up with the schedule the sisters follow here.” Here a year later, I’m relatively healthy and discerning with a community that is welcoming and more willing to see how things go. Trusting in God isn’t easy, but that whole experience opened my eyes again.

I was in university studying music when every musician’s nightmare struck; a debilitating injury that left me unable to play. My dreams of the symphony and teaching at a university were now gone. Depression set in and it of course took its toll, like depression does. After years of the “why me” blues where I lived in a fog from day to day I started to realize that life was short and precious and that I needed to be doing something with mine. I applied myself to finding my path and along the way found God and a wonderful and challenging career.

Hope you are soon feeling much better Julia. There have been too many times to remember when my plans were surprised and redirected. It all works out.

I started back to Karate last fall after a 15 year hiatus brought on by scoliosis and back surgery. I grew up with some medical issues, but nothing that really kept me out of having fun and doing what I liked. At 15 I had major surgery in which I literally grew 2 inches in 8 hours (with the help of some talented surgeons). Along with that surgery came a 2 year long list of “can’t do”. When those two years were done I was busy with life and trying all sorts of things. It wasn’t until I started getting winded going the 5 minute (brisk) walk between home and work that I started thinking… gee… I’m out of shape!