Sister Dorothy Stang, SNDdeN, was a Sister of Notre Dame de Namur who was killed in February 2005 because of her work with and on behalf of the people of Brazil. She had lived in Brazil for over 40 years ago and worked with the Pastoral Land 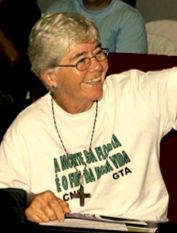 Commission, an organization of the Catholic Church that fights for the rights of rural workers and peasants, and defends land reforms in Brazil. The Sisters of Notre Dame de Namur have a web page dedicated to Sister Dorothy Stang.

There was a lot of news coverage recently because one of the persons responsible for her murder was acquitted. Then this article came out about Sister Dorothy’s brother, David Stang — “Nun’s Dream Lives On” by Colleen O’Connor of the Denver Post. Though the story emerges from the terrible tragedy of Sister Dorothy’s death and the ongoing oppression of the poor in Brazil, it is filled with hope and with light.

Dorothy’s murder had a profound affect on her brother David. According to this article, the murder “thrust David — blissfully retired and tending his coin and stamp collections — smack in the middle of an international drama of land wars and death lists.”

[David] Stang, who is studying Portuguese, has traveled to Brazil nine times, attending all the trials. He has trekked deep into the rainforest to visit Dorothy’s grave and to sleep in the bed where she spent her last night….

Over the past three years, he has met with Brazilian politicians and embraced countless farmers who grieve the loss of Dorothy.

And he has worked with journalists from CNN and international newspapers to keep her story alive. A week after the murder, he traveled to Brazil with Denver independent filmmaker Daniel Junge to be part of his documentary “They Killed Sister Dorothy,” which won first prize at the South by Southwest Film Festival and will be featured this fall at the Denver Film Festival.

“I think it’s incredibly brave for someone in his stage of life to really put himself out there in the way he has,” Junge said. “I don’t think he planned to spend his retirement this way.”

The investment of time, however, helped the prosecution, said Brent Rushforth, the Washington, D.C., lawyer who represented the Stang family at the trials.”His presence as a representative of the family, and keeping the spotlight on the story, is one reason why the Brazilian guys have done their job,” he said….

Stang, who calls himself “the living spokesperson for Dorothy,” … vows to keep her legacy alive, even if it means spending time with people such as Henri des Roziers, a French priest in Brazil who, according to local journalists, has a price on his head of 100,000 Brazilian reais — about $38,000, or twice the amount allegedly paid for Dorothy’s murder.

When des Roziers invited Stang to attend the opening of a new school named for Dorothy in Xinguara, at the heart of the violent conflict, he didn’t hesitate. The trek included two airplane flights and a four-hour drive in a pickup truck on rutted jungle roads deep into the frontier, where he was greeted by hundreds.

“The workers wore hard hats and were standing at attention. The kids came out in their uniforms. Everyone sang songs. There were hugs and tears. If I’m a symbol of pride to them, then, yes, I’ll be there.”

Do read the full article in the Denver Post and check out the Sisters of Notre Dame de Namur’s web page dedicated to Sister Dorothy Stang.

I’ve been reflecting a lot on how one’s own personal call (in this case, Sister Dorothy’s) isn’t just one’s own, but affect others. David, Dorothy’s brother, was profoundly affected by her call which eventually translated into a call for him. Being called by God is such a personal thing and yet it is not just about us for it transforms not only us but those around us. That can be a difficult concept to grasp, especially in a society that constantly tells us that it is all about me, me, me. But God’s call — to become a nun, to teach in the roughest section of the city, to be kind, to have children — always has a communal dimension, a call to others around us.

There was a documentary about her at the SIFF. I wanted to go, but didn’t make it. Supposedly it’s going to have a limited release later on.

Hi Sister Julie, Thanks so much for this post on Sister Dorothy Stang. I just got back from Brazil, where the future of the Amazon is always a hot topic of conversation. I remember hearing about the acquittal of one of the men accused of her murder, but I didn’t know a lot about the story at the time. It was good to learn more about her life, as well as all the work that her brother is doing on her behalf. It reminds me of the story of Oscar Romero, definitely one of my heroes. Please do keep writing about such inspirational figures, even if they were/are misunderstood. I really like your reflection on the communal aspect of all types of callings. Definitely a good reminder that nothing we do is in isolation. Thanks again!