I am so proud of my nun!  In addition to her ultra-coolness on the Vatican/Canon Law/Religious Life scene, she is also one of the most holy, gentle women that I know. I have great respect and affection for Sharon. 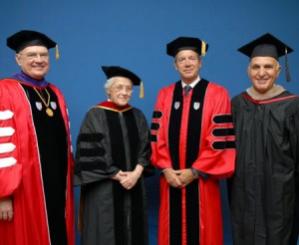 Sharon Holland, IHM, one of the first female lawyers to work at the Vatican, was awarded the International Medal from St. John’s University in Rome on July 15.

Sister Sharon, a canon lawyer, is the bureau chief of the Congregation for Institutes of Consecrated Life and Societies of Apostolic Life at the Vatican, a position she has held since 1988. She is one of the highest-ranking women in the Vatican.

The International Medal is given by the university in recognition for service to the global Church. The citation for her award says Sister Sharon “models what is best about religious life.”

She holds a doctorate degree in canon law of the Roman Catholic Church from Gregorian University in Rome, one of the first American women to do so. In the citation, St. John’s University calls Sister Sharon one of the world’s leading canon lawyers. She has taught canon law at Catholic University of America; Regina Mundi Pontifical Institute in Rome, a theological institute for women; the Pontifical Urbaniana University; and St. John’s Provincial Seminary in Plymouth, Mich.

She was also delegate for the religious office of the Archdiocese of Detroit, serving as a consultant on canonical matters, and was an auditor for the Archdiocesan Tribunal.

Sister Sharon is a member of the Canon Law Society of America and an internationally known speaker on matters of canon law and consecrated life. She has published more than 30 articles, including two which appeared in The Code of Canon Law: A Text and Commentary.

It is wonderful that Sister Sharon has won this award. I can understand why you would be especially proud as an IHM. To me, sisters like Sharon are an inspiration. She is a Roman Catholic woman who has served the Church and has been recognized for it. Congratulations!

If nothing else, they finally got her in a Habit! LOL … No offense intended … I think that it is fabulous that they are honoring someone who has worked all her adult life to make things better for her Church. I didn’t know that there was a Catholic woman’s college about theology … wow! Cool.

Congratulations! I would be so proud too! IHM’s rock!

I have personally been deeply moved by the professional and compassionate work of this wonderful woman. She is a model for Religious Women because of her honesty, love and deep concern for the dignity of the human person. Long live Sister Sharon!

CONGRATULATIONS! Sr. Sharon! Was your student in Regina Mundi from 1997-2000. I am back in Malaysia now serving at the Archdiocesan Postoral Institute of Kuala Lumpur, assisting the Director of the Institute, mainly for the Mandarin speaking community! I am so proud of you! I enjoyed being your student and i think was one of those who asked and clarified many questions and doubts!