Stories of thanksgiving and transformation and nuns 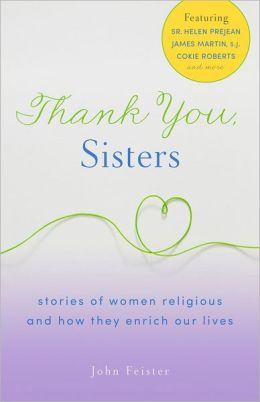 It’s Thanksgiving week here in the United States, and among the things I’m thankful for are good stories. And I found a bunch of them in the new book, Thank You, Sisters!

The stories come in the form of 13 essays by a variety of writers, who talk about their personal experience with Catholic sisters and how it influenced their lives. The stories describe how Catholic sisters have worked with and among people who suffer because of economic, racial, and political injustice.

As I reflect on the stories, it’s hard to say which is my favorite. Was it the one by humorist Liz Scott Monaghan about Sister Helen Prejean? The essay was at turns heart-wrenching and light-hearted. At one point, Liz talks about getting to know Helen, and then, “as it happened, [Helen] landed a contract with Random House for Dead Man Walking at the same time I landed one with St. Martin’s Press for my humor book, Never Heave Your Bosom In a Front Hook Bra." Isn’t that how it goes -- laughter and tears are often traveling companions in this life.

Or maybe my favorite was the essay “Dorothy’s Choice,” about Sister Dorothy Stang. The essay was written by Binka Le Breton, who works to conserve the Brazilian rain forest and improve the economic conditions for local people. In it, Binka looks at the choices that Dorothy made to live as a follower of Jesus Christ, including the choice to lay down her life out of love for the people. Binka talks about Dorothy Stang as a radical feminist, one who challenges the status quo and “forc[es] us to look deep inside our hearts to remember: God calls us to be transformed.”

I also loved the story by Father John Rausch, about Sister Bernie Kenny. As I read, I almost felt like I was in the VW Beetle with Sister Bernie as she bumped along the hollows and ridges of Appalachia to bring health care, compassion, and friendship to people whose great needs were largely invisible to society.

Or maybe my favorite was the essay by Father Maurice Nutt about the “preachin’ women” who helped him become the homilist he wanted to be. He recalls Sister Thea Bowman, FSPA, taking a no-nonsense approach with her homiletics students: “How am I supposed to believe what you are saying if you don’t believe it yourself? Preach with confidence and conviction, or sit down!”

Ok, so I really can’t chose a favorite – I liked them all. For me, the book achieved what editor John Feister set out to accomplish: “May this book inspire other tellings, so that the contribution of Sisters may be more widely known” (from the Preface).

Are there Catholic sisters and nuns in your life that you’d like to give a shout-out of thanksgiving to during this week of Thanksgiving? Please add their names in the comment box below, and we’ll keep them especially in our prayers this week.