Teresa of Avila’s desire to give her life to God

How to Become a Nun
Where is God Calling You?
Saints
By Sister Julie

This is the second in a series of three posts on Saint Teresa of Avila. The whole piece was originally published in VISION, the Catholic Religious Discernment Guide. Read yesterday’s post, which is part one in the series: My BFF is a 16th century nun, Teresa of Avila.

Doing Something Big for God

One of Teresa’s first mentions of wanting to give her life to God comes in a story from her childhood. Teresa, at the tender age of seven, was inspired to do something big for God. We’re not talking here about making crosses out of clothes pins. Teresa decided that she and her brother ought to become martyrs because that was the quickest way to heaven (Life 1.4). So Teresa and her brother set out in search of unbelievers so that they could “beg them, out of love of God, to cut off our heads.” But no sooner had the children started their journey than an uncle caught sight of them and promptly returned them to their mother. Teresa surrendered her dream of martyrdom, concluding that “having parents seemed to us the greatest obstacle.”

She resigned herself to an ordinary childhood. Still, she clung to the desire, however innocent and immaturely expressed, to do something big for God. She took consolation in pretending to be a nun: “When I played with other girls I enjoyed it when we pretended we were nuns in a monastery, and it seemed to me that I desired to be one, although not as much as I desired [becoming a martyr or a hermit]” (Life 1.6).

This episode in Teresa’s life reflects the difficulty of feeling called to something, but not knowing exactly what. When I felt called I thought maybe it meant joining the Jesuit Volunteer Corps or dedicating myself to marriage and raising a family. Not convinced that religious life was for me, I tested many alternatives. But no matter how good they were or how much I welcomed them, they didn’t seem to fit.

No substitute for real nuns

Just as Teresa had romantic notions about what it meant to be a martyr or a nun in the 16th century, so too I had some skewed ideas about religious life in this century. My ideas came from a number of sources; actual experiences with nuns as an adult wasn’t one of them. It occurred to me that I hadn’t considered religious life before because I didn’t know what it was about. My lack of accurate information left me with a superficial understanding of religious life and the women and men who lived it.

Teresa’s life shows the importance of first-hand experience with people in religious life. When Teresa was twelve, her mom died, and she was raised by her father and older sister. When her sister left the house to get married, Teresa’s father decided to send Teresa to the convent school to be taught by the nuns and live with them. Teresa wrote of her initial unhappiness with this, mostly because she was afraid the nuns knew that she didn’t always live an exemplary life. Within days, however, her unhappiness gave way to peace, and she began to feel at home. 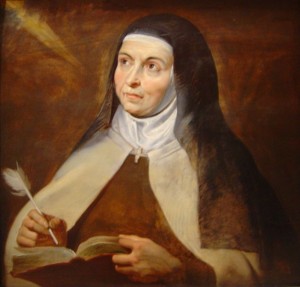 “My soul,” she wrote, “began to return to the good habits of early childhood, and I saw the great favor God accords to anyone placed with good companions.” (Life 2.8) While living with the nuns, Teresa found one who became a mentor and friend. This nun talked to Teresa about the things of God and even shared with Teresa her own path to religious life. This personal experience lead Teresa to free herself “from the antagonism that I felt strongly within myself toward becoming a nun” (Life 3.1). Still, Teresa notes, “I had no desire to be a nun, and I asked God not to give me this vocation.” (Life 3.2)

Throughout my discernment about religious life, I took great comfort in Teresa’s words. How many times did I pray to let this vocation pass me by? Yet even then, I felt as attracted to the life as I was terrified by it. What kept me going were the IHM sisters around me who encouraged me and who, by their lives, showed me the great gift and adventure of religious life. Had I not had a direct experience with nuns, I might never have been open to the possibility of religious life.

In what ways have you tested out your desire to give your life to God or to a vocation like marriage or education or art or parenthood? What words of wisdom do you hear from Teresa in pursuing this desire?

Thank you, Sister, for these series on St. Teresa of Avila. Like many Catholics, she has had a profound impact on my own spiritual life. I first read her Life in the early months after my return to the Church, and it sparked for me a great interest into the kind of prayer about which she writes. I then moved on to The Interior Castle, which I’ve now read a good six or seven times. I had the great blessing last year of taking a graduate theology course on her and St. John of the Cross’ mystical theology, from one of the world’s leading experts in their work, Fr. Martin Laird, author of “Into the Silent Land: A Guide to the Christian Practice of Contemplation”, and himself an extraordinary confessor for the Carmelites in England.

One of the most profound discoveries that St. Teresa made aware in me is the primary importance of self-knowledge in the spiritual life. Teresa wrote often that humility is nothing else but self-knowledge, and that it is knowledge of self that truly leads to knowledge of God, as God is the ground of our being, and when we enter deep within ourselves and come to know ourselves more fully, we discover the union with God that exists in every human soul (and dare I say, this was quite an Augustinian discovery of Teresa’s, as it was Augustine who prayed, “Lord, let me know myself, that I may know you.” Of course, I can turn anything into an Augustinian discovery :0

Aside from her tremendous insight into the spiritual life, what a wonderful role model she offers for women. Often lost in Teresa’s writings is the tremendous sense of irony that she employed. She was frequently navigating the censors of the Inquisition, and so often she would write things like, “But certainly the learned men know more than me, as I am stupid.” We often think she is being self-deprecating there, but in fact she is usually being ironic. She is saying, “I am a woman, and I am smarter and know better than most of you educated men.”

Anyway, I can go on forever about St. Teresa, but I’ll leave that to you. Thanks for this series of posts. Take care!