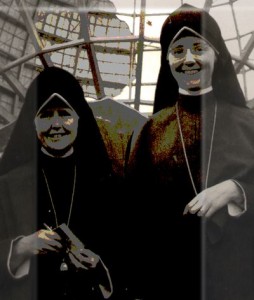 The one-hour film includes interviews with Maryknoll Sisters and Poor Clares and, among other things, looks at “the choice to lead a profoundly religious life in the Catholic tradition in the post-feminist era”.

According to reviewers of the film, there is no narrative, allowing the women to speak for themselves without the intrusion of interpretation or commentary. While a good idea, it’s important to note that no documentary can be completely “objective” because the very process of selecting and editing clips is itself an interpretation by the filmmaker. Still, I like the approach and appreciate it.

I’m hoping that the film will be screened in Detroit or Chicago as I’d love to see it for myself. The reviews have been interesting but I’ve not read anything from a nun perspective about the film.

Here’s one of the reviews for your reading pleasure.

Also, you can check out the Women of Faith website — it’s got a few things on there, but unfortunately much is still “under construction”. Will write more on this when I am able to see the documentary.

I was able to take a peek at the two clips on the My Face of Belly Girl. The film has enormous potetial if the quality remains the same as the clips. As much as this blog gets attention, I would offer that a documentary such as this one should get much wider play so that all us folk out there really get ‘the good news’.

It sounds like they plan on having more screenings nationally and perhaps internationally, so hopefully it will be widely accessible. I wonder if they’ll have it for sale on DVD or via download.

Belly Girl Films is Rebecca Alvin’s independent production company. The clips to which Victor is referring can be found on Belly Girl Films’ MySpace page.

Wouldn’t it be great if HBO picked it up for their documentary series? Sister I read “The Secret Life Of Bees” and watched the film this past week. I am very glad I read your advice and read the book first. The movie was good but it does not explore the Marian theme nearly as well as the book.

Thanks for posting about my film… what a nice surprise. The film will be screening in Boston at the Museum of Fine Arts, July 1 -5, if people are interested. There are a handful of other dates/places being discussed. Feel free to drop me a note if you are interested in being on the e-mail list to find out when it will be in your area.

This documentary sounds very interesting and reminds me of another one that I saw several years ago on PBS. It was aired during the Independent Lens time slot and was called “Sisters: Portrait of A Benedictine Community”. This was the first movie which showed me how sisters live on the inside and the first about Benedictines. It was a wonderful experience. I can’t recommend it highly enough.