NUNDAY A Nun, Nurse, and Administrator

I just read about Sister Joan O'Sullivan, CSJ, a Sister of Saint Joseph from Hamilton, Ontario (Canada), who died last week. My prayers and condolences to her sisters and loved ones. I knew a few sisters from her community when I was in school in Toronto.  As we begin this week honoring nurses, it seems appropriate to celebrate Sister Joan, a Catholic sister who was also a nurse and administrator and dedicated to helping others. 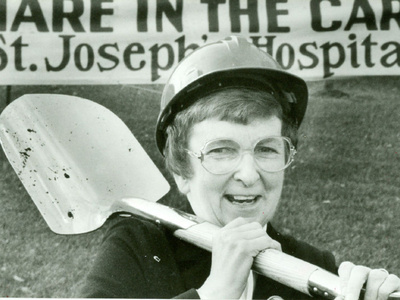 I am captivated by this photo of her. It speaks to me of so much love, ingenuity, and earthiness! The photo is a Hamilton Spectator file photo.

She is described as a trailblazer, and the driving force behind expanding St. Joseph's hospital and health care system. She built at a time when funding was questionable, a risky but courageous choice that the Hamilton community -- and beyond -- continue to benefit from. An article by Joanna Frketich of the Hamilton Spectator has a few quotes from Sister Ann Anderson, CSJ, Sister Joan's friend of 50 years.

She was such a good leader, because she showed respect to all the staff, no matter what role they played in the hospital....

Lovingly known as “Joan O,” she was a sister of St. Joseph’s for 67 years. Anderson said she loved dogs of all kinds — “anything with four feet and a wagging tail.”

“Her faith was the anchor that kept her rooted, active and interested,” said Anderson. “Her loss certainly will leave a great void in the congregation, but her memory will be a great joy. The tone at the Motherhouse is that we are all profoundly grateful for a life well lived.”

Thanks be to God for Sister Joan!