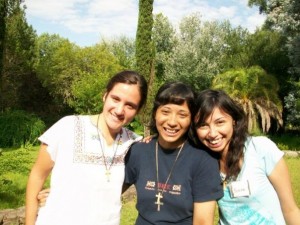 Writes Amparo (who is pictured on the left), “In the middle is Sister Ceci, from the congregation of the Pious Disciples of the Divine Master, and the picture was taken in a “Life’s Projects” camp they held at the beginning of this year. She chose not to wear the habit, though she usually wears a blue skirt. Ceci is a great friend of mine.”

“In this pictures all of the ladies, minus the one wearing pants are disciples. The one with the veil is Sister Gaby (she chose to wear the habit), the first disciple I met and also a great friend of mine. In the bottom the two are Luciana and Ceci in order. The one between the two men is Sister Luz and the other one is 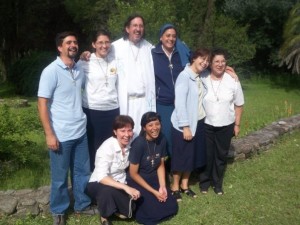 Sister Ana, the Superior of the Argentinian province.”

Gosh, another community I invetigated 35 years ago! Back then, all the sisters wore white habits (at least in California). They have been modified since–a couple of times, according to these pictures! My classmate and I called them “Sister Sheets” because of all the white yardage. What I thought was cool about these sisters is that they wore a blue mantle over their habit and veil whenever they went for adoration. They all looked liked images of Mary–which was their intent, if I remember correctly. Their minstry in California (at that time) was liturgical art (photos, statues, but mostly altar linens). Since I wanted to teach, and they only taught in Italy, I moved on to other communities. Don’t they have a connection the the Daughters of Saint Paul? Even their modified habits look similar.

They do have a Daughters connection! They were the third institute to be founded from the Pauline family.

Yes, another one of the blessed gifts that Blessed (Rev.) James Alberione has given the Church and the world. Thanks for posting!

Another Sister Julie: Very few years ago they chose to put the habit as an option, so most of the ooldest Sisters still wear it. Here in Argentina they (the ones who still wear it) have a fully white habit for summer days and a turqois one for winter days, though they actually use each indiferently. The ones who don’t wear habit anymore use blue or turqoise skirts, and the newest ones who chose to use the habit don’t have the full dress anymore, instead they just wear a blue skirt with something blue on the top and the veil, either white ir blue interchangeable. In what respects to the mantle, the wuit using it like ten years ago, although it ws really beautiful, it was to expensive to bring one for each nun from Rome so they decided not to use it anymore. As Sister Julie said, they are very closely connected to the Daughters who are the 2nd foundation and the Disciples, the third.