NUNDAY Saint Hildegard of Bingen, Doctor of the Church

NUNDAY is usually Monday unless we have a holy intervention — like a nun becoming an official saint and Doctor of the Church! Our own Sister Hildegard Pleva, OSsR, writes about her namesake this day. Visit her community at the Redemptoristine Nuns of New York. 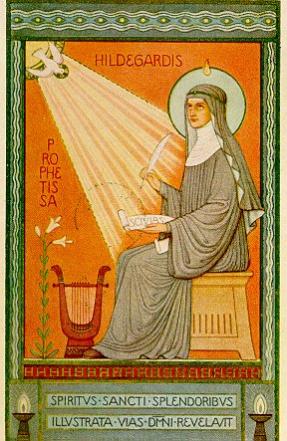 Although never officially canonized this 12th century Benedictine nun achieved renown during her lifetime which propelled her by acclamation into the ranks of those highly esteemed. She has been listed in the Martyrology for centuries. In 2010 Pope Benedict XVI began to speak about her in his more private gatherings, a hint that this fascinating medieval woman was finally going to find an official place in the sun.

On May 10th of this year the Pope announced her official elevation to sainthood via equivalent canonization; no rigid process but recognition of holiness and rich spirituality. Today, the first day of the current Synod of Bishops focusing on evangelization, the Pope declared Hildegard of Bingen (1098 – 1179) and John of Avila Doctors of the Church. Hildegard joins her sisters Teresa of Avila, Catherine of Siena and Thérèse of Lisieux who already hold this title.

The broad scope that variety of Hildegard’s talents and endeavors make her worthy of inclusion in any list of creative geniuses. She was arguably the most celebrated woman of the end of the middle ages. In addition to being a visionary, she was also a naturalist, playwright, poet, and composer. She produced two books on natural history and medicine, wrote the first known morality play, and between 1141 and 1151, was occupied writing the first book describing fifty visions (Scivias – Know the Ways of the Lord) which followed by another record of her mystical experiences (De Operatione Dei – The Works of the Lord).

What our Pope has focused upon is the theological depth of Hildegard’s interpretation of her visions which emphasize the cosmic Christ, the Incarnation of the Son of God as a cosmic event that penetrated all of creation, and the struggle between human beings and the forces of evil in which humanity can triumph and overcome evil. He has also praised her for her public and very unusual critique of corruption within the Church, particularly abuses and neglect in the hierarchy, and also her fierce defense of the Church, the Bride of Christ , by Leaders outside the Church, the most notable being Frederick Barbarossa.

Links below offer a more complete introduction to this fascinating woman. Her life offers inspiration and encouragement to women today. Her feast day is September 17.

What a wonderful tribute to “St. Hildegard of Bingen”. Thank you, Sr. Hildegard, for such informative descriptions of the achievements of this marvelous woman. You must be so proud to bear her name. I read all the links. I appreciate the lovely icon revealing such poise , grace and intensity. A great blog! Joyce IHM

Thank you Sr. Hildegard for this interesting tribute. There was a movie called “Vision” about Saint Hildegard a few years ago, which as I remember was pretty good, and dealt with the various roles that you mentioned, in particular her leadership.