How to Become a Nun
By Sister Julie 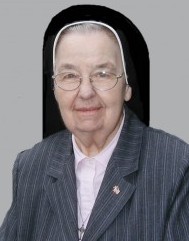 Sister Hiltrudis Powers of the Sisters of the Most Precious Blood, was an amazing nun and artist. She died on December 31 and left a legacy of beauty.

She was born in Quincy, Illinois, and belonged to the Sisters of the Most Precious Blood of O’Fallon, Missouri. The sisters are known for their beautiful artwork. 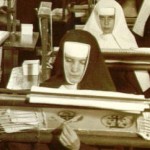 She specialized in stained glass, metal and wood. When newly appointed Archbishop Justin Rigali needed a coat of arms, the St. Louis Archdiocese commissioned Sister Powers to design and craft the work in copper and enamel on wood.

Before Vatican II, in 1962, her order’s art department made articles only for Catholic churches. After that, the department began making artworks for other denominations….

Sister Powers designed the miter and stole worn by Pope John Paul II during his visit to St. Louis in 1999, according to the order.

Here is an awesome sampling of Sister Hiltrudis’ work. 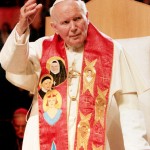 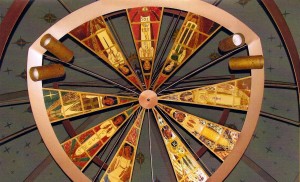 The artwork is outstanding.

I especially was inspired by Sr. Hiltrudis’ stained glass windows. Thanks for posting a sample of her art to celebrate her life.