IGF003 In Good Faith with Sister Bernie Lynch, MM, recorded live on November 5, 2010. Produced by aNunsLife.org ministry. Our hosts talk with the Maryknoll missioner about her life, the book Bernie Becomes a Nun, and being a missioner in everyday life. 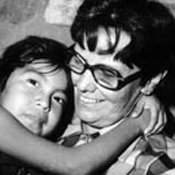 Sister Bernadette Lynch is a Maryknoll Sister and was the subject of the book, Bernie Becomes a Nun (1956). She has served as a missioner for many years in Peru, El Salvador and Guatemala and also has worked with families affected by HIV/AIDS. Sister Bernie has been worked with the Maryknoll Sisters mission awareness team visiting U.S. schools and parishes to help educate people about the missions.