How can I recognize the Word of God in my daily life?

In this Random Nun Clip, we talk about ways that God is with people in the ordinary things of life. Hear the full Ask Sister podcast at AS218. Sister Maxine and with guests Sisters Terry Rickard and Jenn Schaaf of the Dominican Sisters of Saint Dominic of Blauvelt, New York.

This Random Nun Clip is brought to you by our sponsor, the Dominican Sisters of Peace. 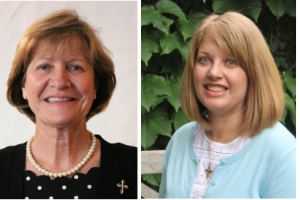 L: Sister Theresa Rickard​, OP, is the President of RENEW International. Sister Terry is a preacher, writer, retreat leader and conference speaker. She is the author of numerous publications, including Live Lent! Year A, B and C, a series of small group resources published by RENEW International. Earlier, she ministered in two multi-cultural parishes in the South Bronx, was the Director of Vocation and Formation ministry for her congregation and was a member of the Archdiocese of New York Parish Mission Team. She holds a Doctor of Ministry degree in Preaching, a Master of Divinity degree, and a Master of Arts in Religion and Religious Education.

R: Sister Jennifer Schaaf, OP, is a member of the Chaplaincy team at Saint Thomas More Catholic Chapel at Yale University. Her focus is to engage students in shared leadership and spiritual development. Earlier, she served in campus ministry at Ohio Dominican University, where her emphasis was on liturgical music, retreats, and developing alternative break programs. She has also served as Director of Communications for the Dominican Sisters of Blauvelt. Sr. Jenn is a native of Washington State. She holds a Bachelor's degree in Music Education and a Master's degree in Pastoral Ministry.