Feast of Saint John of the Cross

Happy feast of Saint John of the Cross! Here’s a bit of John’s story from Saints and Feast Days: A Resource and Activity Book by The Sisters of Notre Dame of Chardon, Ohio.

John of the Cross was locked in a cell six feet wide and ten feet long for nine months, with no light except that which filtered through a slit high up in the wall. He later forgave the men who had imprisoned him. How could he do that? He explained, “Where there is no love, put love, and you will find love.”

John’s father had been disowned by his wealthy Spanish family when he married a poor weaver rather than a woman of equal economic status. Living in poverty proved to be too much for him, and he died shortly after John was born. John spent much of his youth in an orphanage, where he was clothed, fed, and given an elementary education. At the age of 17, he found a job in a hospital and was accepted into a Jesuit college. In 1563 he entered the Carmelite Order. Eventually he enrolled in another university, where he did so well that he was asked to teach a class and to help settle disputes. 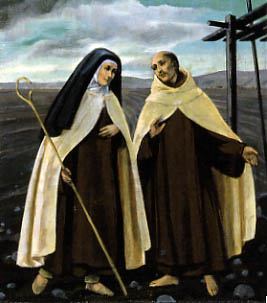 When he met Teresa of Avila and learned from her about the reform of the Carmelite Order, John decided to help with it. As part of this decision, he wore sandals instead of shoes and lived very simply in prayer and solitude. In 1577 the attitude toward the reform shifted.

John was caught up in a misunderstanding and imprisoned at Toledo, Spain. During those months of darkness in that little cell, John could have become bitter, revengeful, or filled with despair. But instead, he kept himself open to God’s action, for no prison could separate him from God’s all-embracing love. During this time he had many beautiful experiences and encounters with God in prayer. Later he would describe these experiences in poetry. In 1578 John escaped to southern Spain to join the reformed Carmelites. There he held leadership positions and wrote reflections on his experiences, which showed his deep spirit of prayer. When he became ill, he chose to go to the city of Ubeda, where no one knew him. It was there that he died.

On this feast day, if you encounter a place of no love, put love, and you will find love.

That is so wonderful. Thank you lord for bringing me to read this.