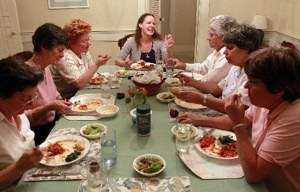 The New Orleans paper, The Times-Picayune posted a great story this week — Young lawyer fights for social justice on her way to becoming a nun (January 29, 2012). The article is about Alison McCrary, a young woman who is a lawyer and in the process of becoming a Catholic sister with the Congregation of Saint Joseph. Alison lives with a community of St. Joseph sisters near Bayou St. John.

You might be wondering, A nun AND a lawyer? But of course! Justice and Catholic nuns go hand-in-hand!

Alison sees her role as a lawyer fighting for social justice meshing perfectly with becoming a nun.

“People have such a misconception of what nuns are,” she says. “We’re supposed to run into the world, not out of it. Our eyes are wide open, and our sleeves are rolled up….”

“There are so many struggles of the poor and oppressed,” she says. “If I’m not engaged in some kind of social change, then something is wrong.” During an internship with the PeaceWomen Project at the United Nations in 2005, she met impressive women doing the kind of work she wanted to do. “I found out they were lawyers,” she says. “I was inspired by what they were doing, and that planted the seed for going to law school….”

She entered the Loyola University New Orleans College of Law in August 2007. During her work as a paralegal and volunteer activities as a law student, she met several Sisters of St. Joseph and saw the important work they were doing, and she felt called to become a nun. “I met Sister Helen Prejean and Sister Lory Schaff and all these incredible women who were living the gospel values, and I thought, ‘I want that,’” she says.

She started meeting with a spiritual advisor, and after finishing law school and passing the bar in May, 2010, she took the first step to becoming a Sister of St. Joseph on Aug. 15, 2010. “I knew I had to find the beauty in the middle of all the struggle,” she says. “My decision is something I feel at peace with.” In a world that values money, power and sex, she is ready to live the vows of poverty, chastity and obedience. “I believe our vows have a lot of meaning,” she says. “I feel like I’m called to that commitment.”

As you read about Alison, what strikes you? What gives you something to think about in terms of your own life?

How about a nun AND a doctor? I’ve been told that i can help more people out in the ‘world’ (as if i’m going to disappear off the face of the earth!) as a lay person. I don’t think so.. I feel that God will always make sure that we are placed at exactly the right place and the right time, with the right people. If that happens to be in the Kingdom of Far Far Away, then so be it. Who am i to question my Creator? Presumably He’s got the Blueplans to my life stored in a file somewhere… Sometimes just need to stop questioning and start trusting..

Amen! That’s the amazing thing about God — however God calls us is the best for us! Nun, doctor, or nun AND doctor!