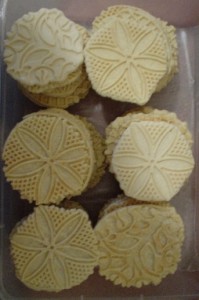 Over the last few days I baked pizzelles — Italian waffle cookies. It’s a tradition on the Italian side of my family (BTW, we are a vanilla family, not anise) especially in the seasons of Advent and Christmas! My Aunt Linda is the main producer of pizzelles for the family. My sister had a pizzelle maker (a waffle iron with patterns) she wasn’t using so I snagged it when I was home for Thanksgiving. I’ve now made upwards of 300 pizzelles.

If you’ve never made them before, they are pretty easy to make. However they require constant vigilance. The cookies only take 20-25 seconds to bake (two at a time on the waffle iron). Quick, yes, but with a batch of 200, it takes a bit of time. Being the efficient person that I am, I tried to get the routine down so that I could make use of the 20 seconds while the cookies were baking.

Hmmm …. what could I get done in 20-second increments?

It was kind of fun to see what I could get done in 20 seconds, though I remained stuck in that mode even after I finished baking.

So what to do with 200 pizzelles? Well, I learned from my Gramma and my Aunt Linda that pizzelles are made for giving. I think that’s why I love them so much. So this most recent batch will be packaged up in little tins and boxes and hopefully make people as happy as they make me!

How fun! I am not an anise fan either. Enjoy!

Even though I am more of a cook than a baker, we make Christmas cookies every year. I package some for gifts and then put a plate out each time we have visitors during the holidays. People love them. I have never made pizzelles but would like to try. They are delicious and light. I too am not fond of anise. Vanilla seems better to me.

This year we made Swedish almond shortbreads (a family tradition as my hubby is half Swedish), rock cookies (a plain ball-shaped cookie with nuts, dried cranberrries and raisins – they taste much better than they sound), chocolate chip bars with nuts and coconut and macaroons with a cherry propped in the middle for color.

Ooooh. My great grandmother would make those…hers were just rolled, cut, and fried with a ravioli cutter and dusted with powdered sugar, though. Never put anise in those, but she’d make anise biscotti, too.

A pizzelle without anise oil is just an ice cream cone, IMHO! The anise aroma perfumes the house for days. It’s says Christmas to us more than the scent of pine. I started baking pizzelles when I was strong enough to lift the heavy, cast-iron, over the burner, single cookie maker. 12 eggs of dough made a mountain of pizzelles, all baked one at a time. However, the cast iron would get so hot that the cookies baked in 8-10 seconds. Now we used that new-fangled electric iron. Our batter was pretty soft. We’d spoon it onto the hot plates. Our pastor (who still uses the cast iron maker that puts his family crest on each cookie!) and another friend has a firmer recipe where you have to roll the dough into a small ball then press it in the iron.

Baking pizzelles always reminds me of the sisters that used to bake communion hosts. And sharing a pizzelle with someone reminds me of the Polish custom of sharing the Christmas wafer (oplatek), a very Eucharistic pratice. In my Polish-founded community, we still share the wafer. One year in my local home, we had to use a pizzelle instead of an oplatek because we couldn’t find a Polish Christmas wafer in Bible-belt Oklahoma!

I need to pull out that recipe and get baking! Say, Jen, we used to call that style of cookie “ribbons.”

I think my Gramma did ribbons too. There were never just one or two kinds, always a tray full of may different kinds, including the ever popular rum balls.

Sister Julie, CSSF … An anise-lover is heard from! My Gramma used the one over the burner until she couldn’t stand for long periods of time. So her kids got her the electric. When visiting friends last month we made their pizzelle recipe (anise, but I still helped out) using the iron over the burner method. I must say it was pretty hot. I’d pray a very fast Hail Mary to time the cookies.

And you know, it does feel a bit Eucharistic. As we say around the Press, “Praise be Jesus!”

BTW, in what kind of store can you buy an electric pizzelle iron? I live in a fairly Italian area and have never seen the electric irons for them. Are pizzelles kind of tricky to make (like one of those things where you kinda need experience) or is it easy?

Hmmmm. I’m a librarian rather than a mathematician or baker, but I was pondering where the other hundred pizelles went. (Since you made upwards of 300 and were only contemplating what to do with 200)–so either you’ve eaten them, or you are counting the ones you made with friends, or….

If it were me, it would probably be the first option.

Yummy! Thanks for sharing! You do “your people” proud!

Pizzelles are very easy to make … actually that’s what happened to the other 100! They were test cookies. Some were too raw, others too crisp … I’m a bit of a perfectionist so I had to get the dough in the middle so the waffle design was centered etcetera etcetera! But basically you make the dough, roll some dough balls, plop them on the iron, close, and in 20 seconds, presto! The cookies then have to be flat while they cool off and firm up. The taste of the cookie deepens as they sit for a bit. In fact we don’t usually seal them up, just stick them in a box (lid from a box of reams of paper works great) and cover with paper towel. Cookies stay fresh and yummy. So back to those 100 or so cookies, yes, I definitely had my share of those but I did give them to friends to make sure I got the recipe correct!

I’m not sure where to get a pizzelle maker .. I did a quick google search and saw that Amazon has them (they have EVERYTHING) but also Target.com. I wonder if the actual store has them. You might be able to get one of the “over-the-burner” irons on ebay. Hope you find one, deerose. You’ll love them.

Thanks, Julie. I’ll check out those two sites. I think I’d like the electric one. Those “over-the-burner” type sound kind of scary since they get so hot.

BTW, the picture of the pizzelles is lovely. If you took it yourself, you might consider making it a Christmas card for next year. It’d probably work in color or black and white.

Thanks for this tasty repast that has virtually no calories. And considering all the other “repasts” I have encountered this Holy Season this one has been the healthiest for me. Thank you again!!!

Any decent Italian deli/market should have an electric pizzelle maker for sale. They just may be sold out at this time of year.

I found that I do not have to adjust this recipe for my diabetic family members. 2 cups of sugar divided by 200 cookies equals less than 1/2 tsp. per cookie.

The over the fire irons can be trecherous, plus if you are not gentle in putting it back on the burner when you flip it, (and you have to flip it every 8-10 secs.), you can chip the enamel on your stove. I know I did it.

Also, since these cookies are soft when they first come off the iron, you can shape them into cones or tubes, or form them over a small bowl, Then you can fill them like a canoli. So versatile!

They are great with a good cup of coffee. They also freeze well. To “freshen” them up, I pop them in the toaster oven briefly. They taste fresh baked and the house smells wonderful again!

Please, can someone give a recipe for these? Thank you!

Dough should be sticky, but not overbearingly so. You should be able to scoop up a teaspoon of dough and drop it onto the hot iron.

Cooking time:
Depends on the iron — mine cook for approximately 20 seconds on the electric iron. You want the pizzelles to just start to get golden, but not burned (a matter of seconds between the two). Pizzelles will deepen in taste as they sit out.

Sister Julie I love that you have a blog site and I am Italian and Polish background so I enjoyed all the comments. I LOVE the anise, must be the Italian side of my ancestors. I was looking up recipes and found your site. I have a recipe without baking powder. Have you tried that one. I have a wonderful dear friend that belong to the Sister of the Holy Ghost from Marian Manor in Pittsburgh Pa. I will try to get a picture e-mailed to you but want her approval first. Keep up the wonderful blog God Bless. I am so happy I found this blog. If you have a chance click on my blog site to see how beautiful my church was decorated for Christmas. We have the life size nativity and it is beautiful. It is a slide show I hope you enjoy.

Hi June! Thanks for writing. I’ve never tried the kind without baking powder. I try to carry on my Gramma’s tradition in her recipes, well, unless it includes lard or something. I saw the slide show on your blog. Wow that was amazing! Beautifully decorated.