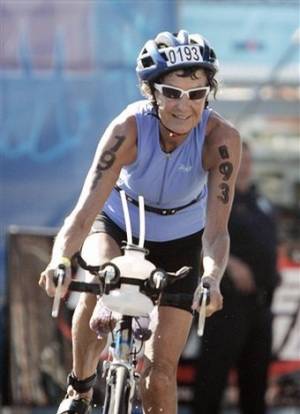 A Nun’s Life correspondent Audra Turnbull recently spoke with marathoning nun Sister Madonna Buder. We are delighted to have this story from their conversation!

At age 81, Sister Madonna Buder is proving that she is still the “Iron Nun”. She has been invited once again to run the Boston Marathon this year. She expressed a little worry that she hasn’t found the time to train properly but said she’s ran so many marathons in her life that she “can get away with less training.”

Even though the marathons came late in Sister Madonna’s life (she started training for races at age 48) she recalls that she was a very active child. In fact, one of her favorite photographs was her as a child running away from a nurse to her father’s arms. According to Sister Madonna we have look to running in the eyes of a child. She says that it helps her to feel like the child in the picture while running.

Though she was 48 when she started training for races she’s certainly made up for lost time. Over the past 30 years she’s competed in numerous marathons and even set world records for Ironman triathlons. Today, race organizers must extend the age limit just so she can compete. 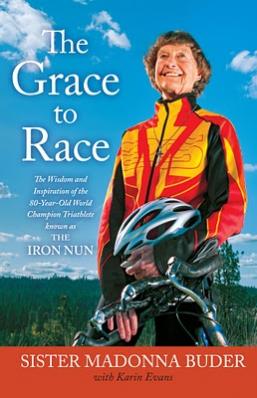 However, Sister Madonna admits that running isn’t always easy. To get her through the tough moments she says that praying for people and counting her steps helps. She also looks to Jesus carrying the cross as inspiration. “It’s easy to call out to God while running,” she says with a laugh.

For the inexperienced she gives this advice: “You know your body the best…if you need to rest; then rest.” She says to not get discouraged if you don’t meet your running goals. “(By) just doing something” can be beneficial.  She also said if your legs get tired to try “skipping, walking or stretching” to break up the monogamy.

Lastly, Sister Madonna, a member of the Sisters for Christian Community, offers a few words to those considering religious life. She says that it’s important “to live out the will of God everyday; every moment.” Also, having a companion, like a spiritual director can  help articulate God’s will for your life.

“It’s the most wonderful thing in the world to know that you’re doing the will of God.”

For more on Sister Madonna Buder check out her autobiography, The Grace to Race.

Great advice – “to live out the will of God every day, every moment.” Reading those words helps to bring the possiblity of doing just that into my awareness.

Thanks so much for this, Audra. I love the line about seeing running through the eyes of a child. When my 2.75 year old nephew was in town this weekend, we took him downtown Chicago. He was so excited and was running in place all the time! Even his walk was a little jog! I’m sure he wasn’t thinking about whether or not he was “in the zone” or O2 depleted! There is something so freeing about justing getting out there and running!

I love Sr. Madonna’s pragmatic approach her workouts when they’re not easy. She clearly has a firm handle on the 90% of running that is mental! “Calling out to God while running”–I love that!

Also, running the BOSTON MARATHON is the Holy Grail of the running world–only about 10 percent of American marathoners are fast enough to meet the qualifying time, and even then a spot in the race is no guarantee. The fact that the Iron Nun has been INVITED again this year is amazing, and the fact that she’s going to run it without the benefit of full training is even MORE amazing! (As you might be able to tell, I’m geeking out from the sheer amazing-ness of it all!) Thanks for the awesome article, Audra!