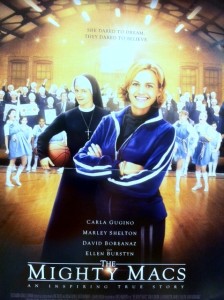 She dared to dream. They dared to believe.” The words are from the promo poster for The Mighty Macs. The movie is inspired by the true story of the coach, players, and sisters of Immaculata College. Against great odds, the small college won the U.S. national women’s basketball championship in 1972.

Yesterday, Sister Julie and I dared to drive through Chicago at rush hour to see an advance showing of The Mighty Macs. It was well worth it! We heard about the movie several months ago from our IHM “cousins” in Immaculata, Penn., home of the Mighty Macs. The movie will be in theaters beginning October 21.

During the movie, I was especially interested in the portrayals of the sisters. So I’m offering a few thoughts on the topic in this post. I’ll start by describing the story line.

The Story
The film is set in 1972, at Immaculata College (now University), at the time a small all-women’s college. The school then and now is run by the Sisters, Servants of the Immaculate Heart of Mary (IHM), of Immaculata, Penn., not far from Philadelphia.

The story begins as 23-year-old Cathy Rush takes on the job of coaching the Mighty Macs. She is newly married to a successful NBA referee. She also is searching for more meaning in her life, which puzzles many people. At that time, most women work in the home, not outside of it, and the roles of wife, homemaker, and mother are closely tied to a woman’s identity and value.

Rush takes the job, despite having no gym and no experience as a head coach. Meanwhile, the college itself is having severe financial problems and is at risk of being sold. Rush dreams of the Mighty Macs being #1 in the country. But the season starts badly as the Macs are thrashed by other teams. Rush, the players, and the nuns have good reason to simply give up, but they don’t. Instead, they draw on the strength and encouragement of each another and together go on to make history.

Some things I like about the movie
The movie reflects the reality that “a vocation” isn’t just for sisters, it’s for all people. Cathy Rush and Sister Sunday, who became the assistant coach, both found their “vocations” as coaches. Being a coach was more than just a job. It was a way for them to find deeper meaning in their own lives and to help others do the same.

One of the scenes I especially like in the movie is when Sister Sunday is in church, praying to God for direction. She doesn’t understand why God brought her to religious life simply to work in the Admissions Office of the college. She prays, “Send me a sign, any sign, as I will be listening for your voice.” Just then, to her annoyance, her prayer is interrupted by the sound of a basketball bouncing against a floor in the nearby makeshift gym. God has a sense of humor.

I also like the way that the sisters supported Rush and the players. The movie conveys a strong message about the power of community. In the movie, when no one else is cheering for the Macs after they’ve been crushed by the opposing team, the nuns are there, in solidarity with the players and coach. That’s what it means to be community – being with one another even when the chips are down. And as the coach and players learn, that’s also what it means to be a team.

The movie also carries a strong feminist message—that society benefits when all people have the opportunity to pursue their hopes and dreams. In some circles historically, there have been questions as to whether a sister or any woman for that matter, can be Catholic and a feminist at the same time. To that question in the discourse, the movie would say “absolutely YES!” It’s true that in the early 1970s, sisters might not have called themselves feminists. But thousands of sisters in the US and elsewhere have worked for decades on behalf of women—in education, in society, and yes, even in basketball!

Some things I don’t like about the movie
Ok, I understand the whole thing about artistic license for the sake of storytelling. But here’s a few things that raised issues for me.

The depiction of the priest as the one who would determine the fate of Immaculata is just plain wrong. The priest didn’t own Immaculata, nor did he dictate to the nuns how the place should be run. The nuns built Immaculata with their own hard work and wise decision making, and the college endured because of their efforts with others committed to an excellent Catholic education for young adults.

The depiction of the coach is also one I’m still mulling over. In some senses, her role is so powerful that it overshadows the roles of the sisters. The coach’s arrival at a critical do-or-die moment in the college’s history could suggest that she was largely responsible for the transformation of the college. I agree that she was a part of that transformation and a powerful symbol of it– no question! But I’d bet all of Mother Superior’s poker winnings in the movie that the college’s transformation wouldn’t have happened if the nuns weren’t already moving in that direction.

For more info about The Mighty Macs

Although the movie doesn’t come out until Oct. 21, you can read the book it’s based on: O God of Players, by Julie Byrne.

I’d love to hear your comments and questions about the images of Catholic sisters that you see in the promotional materials for The Mighty Macs. Please share them by writing in the comment box below.

i can’t wait to see it. i was going to buy the book and read it, but the paperback is $28 and hardback is $70??? anyway, i totally agree no one was going to alter the direction the school was already taking and that the coach just helped move it along. sounds like a lot of fun, though. catholics and basketball-what’s not to love? great review, max.

Excellent review, and it makes me want to for sure catch the showing near us around the opening date! Thanks also for letting me know that the movie is based on a book, and then giving me the title! Yes of course I have requested it! And for all others out there – be sure to check your local public library to see if they have it! (sometimes its hard to take the librarian hat off!)

@Marla, the book is available at Book Finder for a bit more than $5, including postage, if you want to buy it. I read the book years ago, when it came out; it’s an academic (but readable) study, published by Columbia University Press, which may explain the cost. But it is a fun read, as well as informative. Like Julie and Max, I’ve been looking forward to this film, although I’m a bit skeptical as to its quality. Won’t say more till I see it…. Does anyone know why the release has been delayed for about 2 years?

Maybe we could start a discussion thread after October 21? And, Julie and Max, would it be possible for you to do a podcast with either someone involved in the production of the film, with the book’s author, or with some of the Immaculata sisters (including maybe someone who was around in the 1970s and remembers the whole era)?

Great idea about the discussion thread and podcast! We were thinking along the same lines! Am not sure of the reason for the 2-year delay. Would be interested to know!

Can’t wait to see it. We need more movies like this. Being a Sister and feminist is very workable. I love the IHM Sisters. Sally Weiland, IHM Associate Monroe

Great review Sr. “Macs” The Bookfinder link has already gone up, up and away, but I got it on Amazon for $6 something which included postage. The movie trailer was fun, looks like a good time.