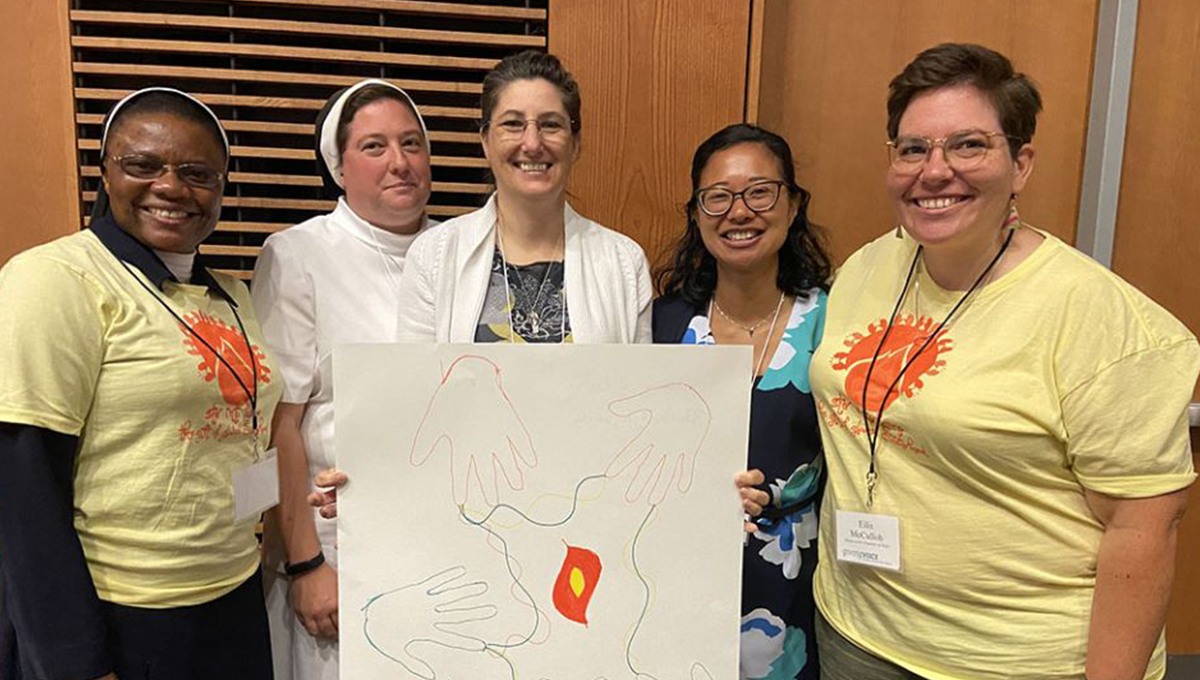 We were 76 sisters from 40 communities, and speaking 13 languages. We were teachers and principals, social workers and case managers, students, pastoral ministers, spiritual directors, campus ministers, justice coordinators, health care personnel, advocates and organizers, and vocation directors. We represented sisters under the age of 50. We are Giving Voice.

After more than two years of COVID-19, racial unrest, and uprisings around the world, I couldn't agree more. In the weeks leading up to Giving Voice, I watched as Akron, Ohio, erupted in pain and anger after the extrajudicial killing of Jayland Walker. I felt helpless and dismayed that my own university had not issued a statement in support of the Walker family. But what was my role in the protests and vigils?

As sisters, we are called to hold the pain, grief and joy of the world in our hands and to unite ourselves with our siblings around the world. This notion of the radical and prophetic call of being present wasn't far from my mind as I headed to the San Antonio airport later that day.

At the airport, I saw two lines to go through security: one for people with documents and one for people without documents. I knew immediately that the people in the other line were individuals who had just been released from immigration detention and, sure enough, by the time I got to my gate, there were a number of individuals holding single plastic grocery bags with all of their possessions.

One man spoke a little English and was asking the airport employees what to do. These people were chastised for getting in line before their boarding group and I thought, "How are they supposed to know?"

As we landed in Dallas, one man leaned over to me and held up his phone that read, "I need help. I don't speak English."

I chuckled to myself ... this is what being present calls us to do, to respond to the needs of the times. Knowing that I had a long layover, I led the group through the Dallas airport — from terminal to terminal and gate to gate.

Along the way, I learned a little about them. Bassam was from Afghanistan and had worked with the U.S. Army. Wilson was from Honduras and traveling to reunite with a brother. Ines and her children were from the same area of Guatemala in which I had lived in 2019. They were all beginning life in the United States free from the detention centers in which they had been detained.

I'll never know if they arrived at their destinations without trouble or made their other connecting flights, but for that minute, our lives intersected. For whatever reason, I was able to be present to them — to be reminded that all are welcome in the United States, and to know that in that moment I was carrying with me all the Giving Voice sisters with whom I had just spent the previous days.

In a different conversation with my home group, we reflected on the call of our own religious vows. I thought about lines from my own Humility of Mary congregation's vows: We proclaim that we are "strengthened by the support of our sisters in community and others in the human family" and that we "will strive to share the love of Jesus through the message of the Gospel and the witness of my life."

Isn't that what we are all called to do? In each of our ministries, our communities, our families, and our countries, we are called to witness to the Gospel of inclusion and to proclaim with our lives that hope is a way of life.

The power of Giving Voice and time spent with my Giving Voice sisters is recognizing that, in spite of our diverse ways of living out our call to religious life, we are able to come together and share in the singular charism of religious life ... to dream of our life together ... to share in ministry with one another ... to cry and grieve and to laugh and celebrate.

I think we would all agree: It is through the support of our sisters in Giving Voice that we are able to continue to say yes to the call to religious life.

Reprinted with permission of Global Sisters Report, which originally published the article.

Eilis McCulloh is a Sister of the Humility of Mary. She is a student at the University of Akron School of Law in Ohio. She is on the board of Akron Interfaith Immigration Advocates and co-chair of the Family Support Community. She is also a grassroots mobilization fellow at Network, a Catholic social justice lobby.