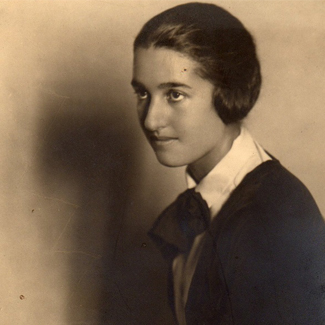 While browsing the Internet for nun stories, I stumbled upon this headline: Britain's oldest nun dies aged 111. My first thought was OMG! I can barely picture where I'll be in a year or two, let alone the next 100! I decided to learn more about Sister Anne--anyone who has lived for over a century is bound to have an interesting story.

Upon googling her name I discovered her community's website where her sisters paid a beautiful tribute to her history, ministry, and passion for life.

Sister Anne entered the Society of Helpers at age 25, however religious life wasn't initially on her radar. “I didn’t want to be a nun," she said. "I wanted to be sculptor. I had lots of boyfriends, and I remember one whom I think I might have married, but I had to do what I felt God was calling me to."

Early in her religious life, she studied catechetics at Lumen Vitae, Louvain University, in Belgium. During her studies she discovered a true love of teaching religious education and began to explore new ways of teaching young people about their faith. She engaged them in questions, talked with them about their experiences, and also included their parents. Including parents was something relatively new at the time, and soon Sister Anne had over 200 people attending Sunday school classes. When asked about what this experience was like, she told the Catholic Herald in 2013, “I wasn’t radical. I was revolutionary. I changed the way religion was taught.”

In addition to teaching, Sister Anne also loved art and learning. She did indeed become a sculptor and was a student at Kingsway Art College, London until she was 94.

As I reflected on Sister Anne's life I couldn't help but think of how her faith must have grown and deepened over time. I was inspired by her dedication to trying new things and her courageous spirit. What's her #nunwisdom for a long life? "Optimism and faith in the God who walks with us."

I pray Sister Anne's story inspires you this day to follow your call, wherever God is leading!

Photo from The Society of Helpers