Little Sisters of the Poor

Where is God Calling You?
Community Life
More Nun Awesomeness 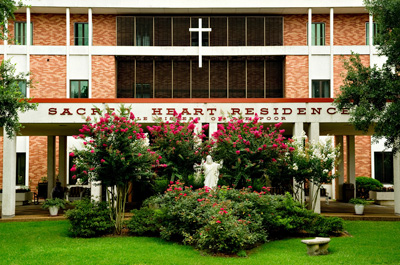 Exploring the chapel before the podcast.

Jane hanging out in the chat room with Sister Marie Cecilia (middle) and Sister Ellen Anne.

We used Facebook Live before the podcast! And we tested out a new tripod.

Spending time with nuns after the podcast is always fun!

Morning, noon, and night. This trip included *a lot* of flying.

Gathering for the post-podcast wave!

Reunited with Sister Carolyn! We first met her in 2014 at National Catholic Sisters Week! 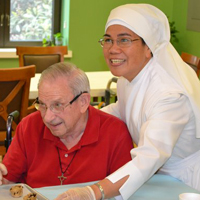 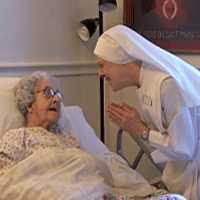 L: Sister Marie Cecilia Fausto, LSP, grew up on a farm in Pampanga, in the Philippines. She earned her Bachelor of Commercial Science and Economics at Jose Rizal University in Manila, and then did additional studies in management and finance. As a Little Sister of the Poor, she has been blessed to exercise her vow of hospitality in direct care of the elderly poor, has served in the chapel and helped with the gardening, and is now a collecting Little Sister, seeking donations for the Little Sisters’ ministry and never failing to enrich the benefactors with joy, caring, and a little spiritual word during her encounters with them.

R: Sister Carolyn Martin, LSP, grew up in Falls Church, Virginia. As a young woman fully on track for the vocation of marriage (or so she thought), she was swept off her feet one day by the God of surprises as she encountered Jesus in the person of His elderly poor—and also in the witness of the religious Sisters who so lovingly served them with joyful simplicity at the Little Sisters of the Poor in Washington, DC. Sister Carolyn now serves the elderly poor as a nurse and a long-term care administrator in Mobile, Alabama, at one of the many Homes operated by her religious congregation for this special mission around the world.

Mission Statement: The Little Sisters of the Poor are an international congregation of Roman Catholic women religious founded in 1839 by Saint Jeanne Jugan. Together with a diverse network of collaborators, we serve the elderly poor in over 30 countries around the world.