What cool things have you done as a nun? 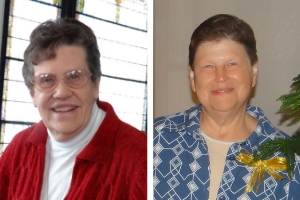 Left: Sister Janet Marie Peterworth is president of the Ursuline Sisters of Louisville, Kentucky. She has been a member of her community both before and after Vatican II and has seen many changes in a nun’s life. Before returning to Louisville to take on administrative responsibilities, Sister Janet served 25 years in West Virginia—20 of those years in the southern coalfields of that state where she ran a non-profit agency that worked primarily with mothers and children. Over her time in ministry, she has served as a middle-school teacher, a principal, a pastoral administrator in a parish without a resident priest, and a hospital chaplain. Sister Janet, who comes from a small family, is a native of Louisville, Kentucky. She is an animal lover and misses the dogs and cats she had in West Virginia.​

Right: Sister Jean Anne Zappa is a self-described “Italian extrovert” who grew up in a large Catholic family in Pittsburgh. She credits the influence of the Sisters at Ursuline Academy in Pittsburgh with her decision to join the Ursuline Sisters of Louisville. She entered the community in 1967, during a period of great change in the Catholic Church and her community as a result of Vatican II. Sister Jean Anne has been a teacher, director of mission effectiveness for the Ursuline Campus Schools in Louisville, president of the Ursuline Sisters of Louisville, an intern at Network in Washington, DC, and has been Mission Advancement Coordinator of Shively Area Ministries since 2009. Sister Jean Anne is passionate about life, relationships and people and believes the point of religious life is to share the charism with others, spread the gospel and serve the marginalized.