What is the Asylum Seeker Resource Center? 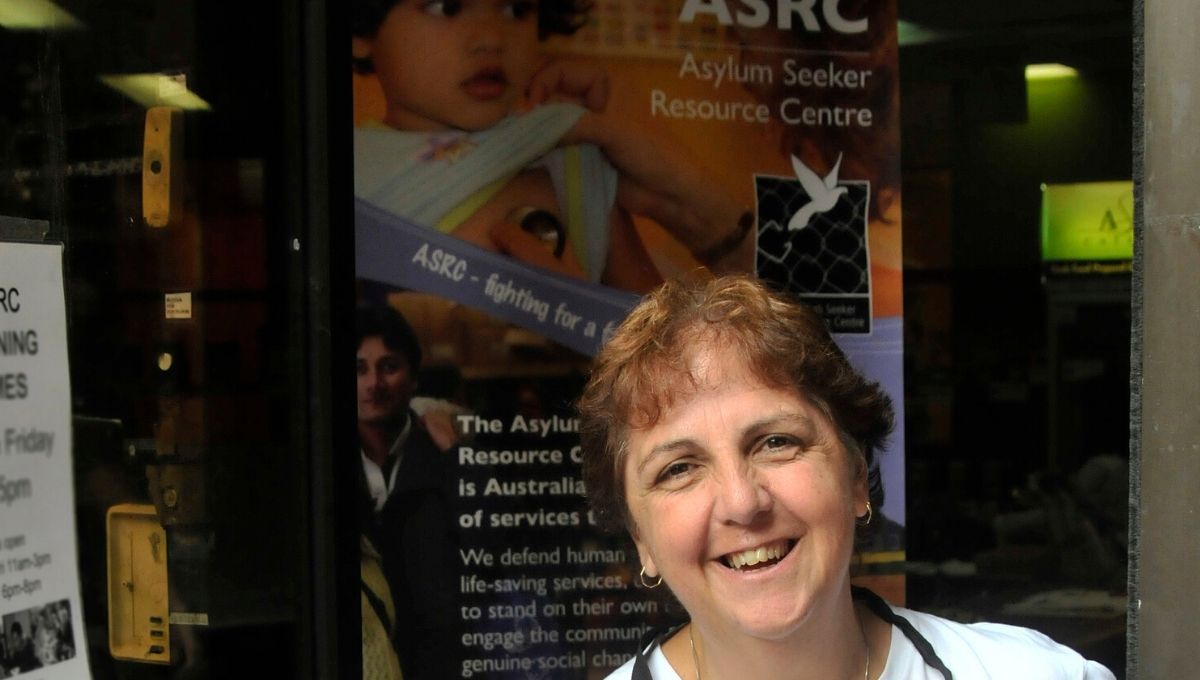 In this Random Nun Clip, Sister Rita talks about the Asylum Seeker Resource Center in Australia, where she has served as a volunteer for 17 years. Hear the full In Good Faith episode IGF038 at aNunsLife.org. Sister Maxine with guest Sister Rita Malavisi, RSJ.

Listen Now:
Update Required To play the media you will need to either update your browser to a recent version or update your Flash plugin.
Click to Download
MP3
https://traffic.libsyn.com/secure/anunslife/RNC-IGF038-feb-27-2020-asylum-seeker-resource-center.mp3
Show Notes

Let us know what you thought of the podcast by taking this short 3-minute survey! Your input helps us shape the future of our Random Nun Clips program! Click HERE to take the survey. Thank you!

Sister Rita Malavisi, RSJ, is a Sister of St. Joseph of the Sacred Heart, from Melbourne, Australia. Sister Rita has served at the Asylum Seeker Resource Center in Melbourne for 17 years. The center has helped thousands of people who left their home countries because of serious harm or extreme danger due to political differences, religion, race, or nationality. Sister Rita also has been involved in Catholic education in Australia. Currently, she is studying at the Institute of Religious Formation Program, based at Catholic Theological Union in Chicago, Illinois.

SISTER MAXINE: My guest today is Sister Rita Malavisi, a Sister of St. Joseph of the Sacred Heart, from Melbourne, Australia. Sister Rita has served at the Asylum Seeker Resource Center in Melbourne for 17 years. The center has helped thousands of people who left their home countries because of serious harm or extreme danger due to political differences, religion, race, or nationality. When you talk about your deep gladness in meeting the needs of the world, certainly your volunteer experience, your ministry at the Asylum Seeker Resource Center, has been that combination, it sounds like, for you.

SISTER MAXINE: Can you tell me a little bit of background about the Center? What kind of services do they offer? What kinds of work have you done there?

SISTER RITA:  The center began in the year 2001. They’re nearly up to 20 years. It started with its  founder teaching a course on sociology, with his students, trying to find a situation around the area of [unclear] that was most in need. Around the area, there were a lot of people who had arrived in the country with a valid visa that had sort of fallen in Australia to study there permanently. They’re refugees, yes. They’re fleeing their own countries because of persecution. They can apply for asylum in Australia, but it’s difficult for them, because as soon as they apply for asylum, they cannot get any funding from the government for Medicare, which is what we have to help people with their health. Sometimes they’re not allowed to work. It makes life difficult for them. So the center started to help people in a material sense by giving out food, helping them have meaning in life, teaching them English, to get a couple of skills. It started with one person and grew to 10 students. I came on board a year later because I was working in the parish close by and I saw asylum seekers in my parish, and they would tell me their stories. My heart was breaking, and I needed to do something about it.

SISTER MAXINE: Which parts of the world did they come from?

SISTER RITA: From all parts. From the Middle East, from Iran, from Iraq, from Afghanistan. In those days there were East Timorese, there were Indonesians. There were people from some of the African countries, Ethiopia, Eritrea, Sri Lanka. I’m going to forget some of the countries as well.

SISTER RITA: It was the persecution that they were feeling because of a fear in their lives because of being of a different religion than the country they were living in, and they were persecuted because of that. Or because of being of a different nationality in their country. Or being a member of a political group. I’m not talking about people who are doing a lot of protesting or anything. I’m talking about people who are contributing to their own society. Because of who they are, they are being persecuted. They cannot live a life that is free. In my own family background, this did not happen to me, but in my family psyche, my own psyche, I know the story of displacement. I remember the story of my mother telling us that in 1948, when she was living in Palestine, the whole family had to pack up and had to leave their home and had to flee because of what was going around in Palestine at that time. They went to Syria. They thought they were going to go back, but they didn’t. In my psyche, there is something in me that’s there that reaches out to those who are displaced or who have lost their homeland, who are far away from their family. I don’t know how my mother left her family and traveled to the other side of the world. Didn’t have phone calls, couldn’t ring and speak to her family. It was just too expensive in those days. I love living in this time because technology is wonderful. I can ring Australia from Chicago. I can Facetime people. I can ring them on WhatsApp.  I don’t know how my mother did it. She was a very strong person and was able to keep in touch with her family through letters. So I think that it’s in me to reach out to those people separated from families, and who are hurting because of that.

SISTER MAXINE: My guest today is Sister Rita Malavisi, a Sister of St. Joseph of the Sacred Heart, from Melbourne, Australia. Sister Rita has served at the Asylum Seeker Resource Center in Melbourne for 17 years. The center has helped thousands of people who left their home countries because of serious harm or extreme danger due to political differences, religion, race, or nationality. When you talk about your deep gladness in meeting the needs of…