Skip to main content
Vocation Stories
Where is God Calling You? 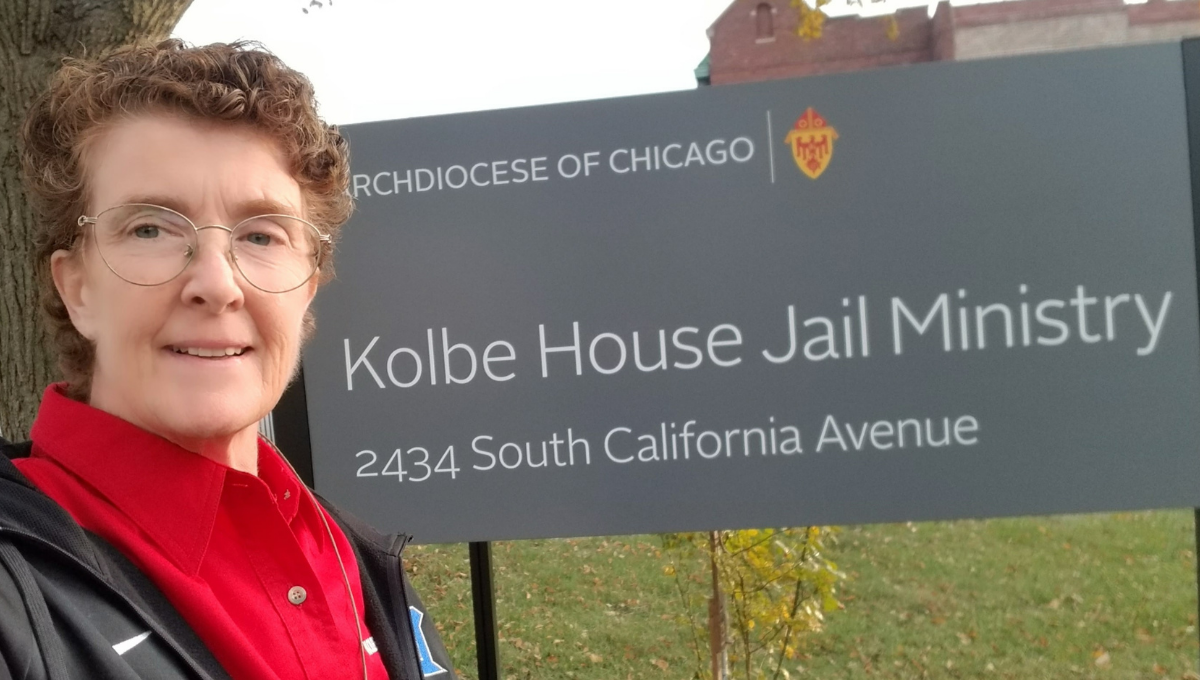 When Cathy Buchanan was a little girl, she told the nuns at her grade school in Kearny, NJ, that she felt a call to religious life. Describing herself as “rambunctious, active and off-the-hook crazy,” Cathy said the nuns felt that she was not a “great candidate…” in fact, she laughs, she was voted “Most Likely to End Up in Prison” in high school.

It seems that the good Sisters predicted only half of Cathy’s future. She did go to prison – in fact, she worked for the New Jersey Department of Corrections for 27 years, retiring as Chief of Prison. It was only then, after her retirement, that she followed God’s call in her heart, and now she IS “Sister.”  Cathy Buchanan is in her Canonical Year at the Collaborative Dominican Novitiate, in formation as a Dominican Sister of Peace.    `

Cathy grew up a cradle Catholic in New Jersey – she and her parents, Mary and Andrew, and brother Peter attended mass regularly and she and Peter attended Catholic school. But it all felt academic, and as she graduated high school, Cathy lost interest in her faith.

In her early twenties, Cathy attended a retreat that changed her life… but even getting there was a round-about journey. 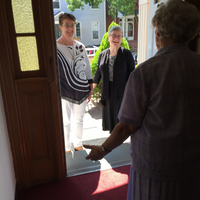 “I was just there for the party, there to have a good time.” When her friend’s parents told her about an upcoming retreat, she feigned enthusiasm to be polite. But when her friend called her about the retreat the next day, she was trapped. She dragged another friend along for moral support, but, as she said, “I did not want to go to that retreat, but God had other plans.”

While at this retreat, Cathy had what she called “a personal experience with Jesus Christ. “I remember, it was with the Emmaus story, on the Emmaus walk that I had a profound sense of Christ’s presence with me.. And I didn’t know what to do with that.” Cathy returned to her faith, attending mass and immersing herself in parish life. It wasn’t long before she was asked to teach CCD, but she felt underqualified. So, she enrolled at in religious studies classes at Felician College, and by filling on the gaps in her religious education, she felt more comfortable with her service to the church and continued to do more.

“I absolutely loved my studies and my work in the parish,” Cathy says. “But it always felt like, even though I was doing all of these things, God was always asking for more.”

Cathy continued to study, taking religion classes and teaching classes, as well as getting her Bachelor’s in Criminal Justice in 2003. As she approached retirement, she decided to get her Master’s in Education, planning to move to Florida and teach after leaving her career in the prison system. Newly minted teaching certificate in hand, Cathy was ready to leave the snow and ice of New Jersey behind and head to sunny Florida.

“And God said, ‘Nope. Not what I want you to be doing, Cathy, I want you to be working for me’” she said. So, Cathy picked up the phone and began to look for a program to study pastoral ministry. Three years into earning her master’s degree, she was invited to serve as a Pastoral Associate at Our Lady of the Blessed Sacrament parish in Roseland, NJ.

Cathy ministered at Our Lady of the Blessed Sacrament for five years, and enjoyed every minute of it, except for one thing - everyone called her Sister. “I was so over the top adamant about not being a Sister,” she said. “It took me a year to get the parishioners to stop calling me Sister!”

Talking about the situation with an older parishioner, she said “I just don’t understand…. Why do people keep thinking I am a Sister?” The 92-year-old women turned to her with a smile and said,

“Maybe that’s what you’re supposed to be.”

“I had spent my entire life trying to make God happy,” Cathy said. “I kept taking on new ministries, learning new things, studying, praying – and I could not find peace in my heart. But when she said that… there it was. And maybe if I shut up long enough for God to speak, I will hear that this – being a Sister – is what God really wants.”

Cathy’s Master’s Program at Seton Hall had requested her to work with a spiritual director, and she found one through a connection at the parish where she was serving as a minister. Her spiritual director, a Dominican Sister in Caldwell, NJ, has been her companion in religious life for more than six years. She was also surprised when Cathy approached her with the idea of entering religious life, and she suggested that Cathy attend a silent retreat to aid in her discernment.

“I thought that was insane,” Cathy tells us. “I can’t be quiet for seven days!” Again, as she became quiet, God spoke to her heart, and she began the journey to religious life.

Cathy spent more than two years in active discernment, praying for God’s direction on this new path. She also responded to the promptings of God from her prayer, contacting religious communities and spending time in conversation with their vocation directors.” 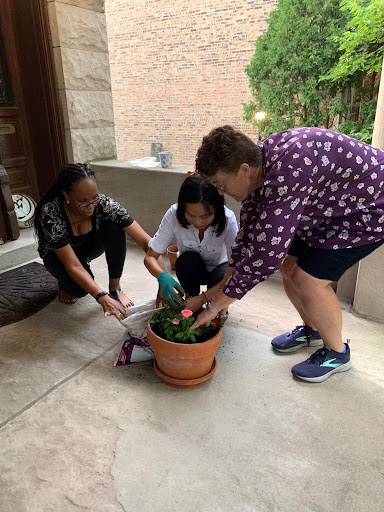 “I discerned with five different communities,” she said, “and not one of them was Dominican. But given my interest in mission-driven work, my spiritual director suggested that I visit a Dominican congregation as well.”

Cathy studied each community’s charisms and missions, hoping to find a religious home where his gifts might add to their ministries. She also attended introductory retreats, often called “Come and See” events, at all six communities, then revisited three of them. But after that, she said, I really felt that the Dominican Sisters of Peace was where I could feel at peace and at home.

After a year of visits and discernment, Cathy was ready to make a commitment, and she and Sr. June, the vocation director for the Dominican Sisters of Peace, began the process of mutual discernment. This is an important step in the formation of a religious Sister, as it helps the Community ensure that the new candidate is also a good fit and can be happy and successful within the Congregation. Cathy was all in during the process, attending service missions and spiritual retreats in Kentucky and New Orleans, and visiting the Congregation’s communities in Akron and Columbus, Niskayuna and New York, NY, and New Haven, CT.

On August 8, 2020, during the COVID-19 pandemic, Cathy was welcomed to the Dominican Sisters of Peace in a virtual ceremony at the New Haven House of Welcome. She lived there for a year before being accepted into the Novitiate. Now at the Collaborative Dominican Novitiate, she has entered the world of study and contemplation, and she is at peace with her future path, even if she’s not sure where it may lead.

“My story is just beginning,” Cathy says. “I don’t even know where I will be living in six months, yet I am at peace with that. God has a plan, and I am just trying to be open to where God is leading.”

Header Image: While at the Collaborative Dominican Novitiate in Chicago, Sr. Cathy Buchanan is ministering at the Kolby House Prison Ministry.

Image One: Cathy Buchanan, left, accompanied by Dominican Sister of Peace Vocations Director Sr. June Fitzgerald, OP, right, is welcomed to the New Haven House of Welcome by Sr. Julia Grey, OP, on August 8, 2020. The ceremony was webcast nationwide to allow Sisters to attend virtually during the COVID-19 pandemic.