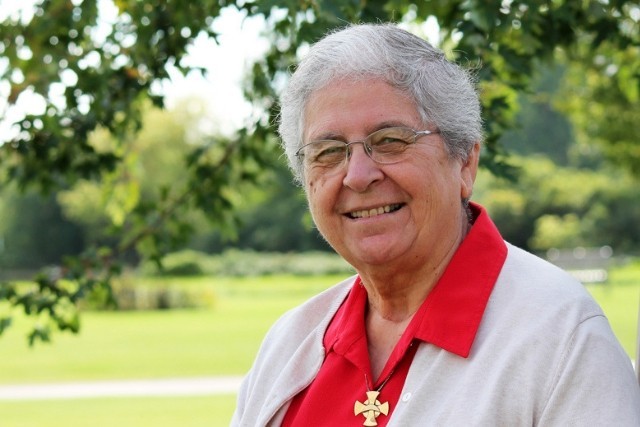 A Vocation Story by Sister Elise Cholewinski, OSF
Sisters of St. Francis of the Holy Cross

Not long ago, I received a surprising email from the Jesuit Retreat House at Oshkosh, Wis., and on the subject line was one word: “Help!” A Couples’ Retreat was scheduled for the weekend beginning with Valentine’s Day; because the woman who was supposed to direct the retreat had to cancel, they asked if I would be available to step in?

So there I was, a celibate Sister, preaching about the theology and spirituality of marriage. It turned out to be a wonderful experience as I spoke about the marriage commitment being lived out in the shadow of the Covenant between God and his people at Mt. Sinai; and Jesus, the Bridegroom, who sealed a new Covenant through his Blood on the cross. I concluded the retreat with the story of how, when my father was dying, he and my mother each had said, “There isn’t a thing he/she wouldn’t do for me.” Neither of them knew what the other had said to their children, but I have truly treasured what I heard from each of them.

Toward the end of the retreat I raised the question, “So what about me?” I then showed the retreatants my ring and reminded them that I, too, have entered into a covenant relationship. I explained that while married people witness these beautiful covenant relationships through their lifestyle, a person in religious life witnesses to the life that is yet to come, when all people together will be the bride of Christ. I stated that vowed religious can rightly be called a spouse of Christ.

Jesus, to whom I have dedicated my life, has given us the greatest example of love. He became incarnate, living among us as a poor and humble person, sharing the good news of God’s Kingdom, and bringing forgiveness and healing to those who suffered. Through his Passion and death he showed us that truly there isn’t a thing he wouldn’t have done for us.

Each day I look at my life and ask myself if Jesus can say of me, “There isn’t a thing she wouldn’t do for me.”