A Nun, a Lutheran, and the Perfect Storm

Last night Chicago witnessed one of the most spectacular storms — also very dangerous. Here’s my story of the storm.

Not one to believe weather reports, I hopped on my bike after work yesterday and went riding downtown with my buddy Carol. We parked our bikes at Ohio Street Beach, right at the foot of Navy Pier. The beach is almost always populated during the summer,  and the stretch of Lake Michigan water that goes along the board walk is a place that many swimmers do laps (it’s where I trained for my triathlon last year).

It was about 6 p.m. and the sky was cloudy, but not threatening in any way. We locked up our bikes and biking gear and hit the water. Immediately we noticed that the water was higher than usual — normally you can walk for 1/4 mile + out but even before we got to the bouys, the water was nearly neck high. We swam a bit but mostly chatted. It was so great to cool off. Then off in the distance I saw a flash light up the sky over Lake Michigan. “Uh, Carol, i think that was lightening.” “Oh, it’s way off. We’ve got plenty of time,” replied Carol. “Yeah, but I’m pretty sure lightening travels faster than you or I can swim,” I said. We kept going out but as soon as we saw the next, closer flash of light, we headed back toward the beach. Swimmers were still heading out, but as the sky got darker, I was glad we were heading in.

Just as we saddled up our bikes and started riding through downtown towards home, the rain hit. Big, huge drops of rain that hit with a thud and exploded like a water balloon. Still we weren’t too worried because we were already soaked from swimming and the extreme humidity, but as darkness descended we began to wonder if we’d be able to get ahead of the storm. Unfortunately neither of us had bike lights because we didn’t expect to be out late nor did we expect the premature darkness. So we rode safely but swiftly. About 2 1/2 miles from home, we parted ways, each to our own abode. By then the lightening was all around us, the rain pouring down, and the darkness swallowing up the city. It was as beautiful as it was terrifying. 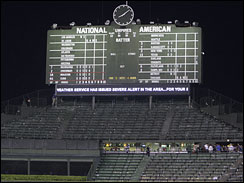 Fortunately good bicycling skills and adrenaline took over. I took side streets home, riding through a few flooded streets and trying to stay away from lightening, trees blowing precariously in the wind, and wavering cars. Truly it was exhilarating though probably not all together smart. I finally got to my house. I had to walk between my brownstone and my neighbor’s. The alley was lit up like a night game at Wrigley. I could feel the lightening reverberating all around me. I threw my bike over my shoulder, hopped up my back stairs and prayed that my metal door would not electrocute me. Somehow I got me and the bike inside, climbed another set of stairs and breathed a huge sigh of relief when I reached my flat. Pfew!

I realized how scary the situation was when the tornado siren started going off. Carol called having gotten home safely. We hung up, and I went to find my cat. I picked up Chloe the Convent Cat, held her close, and sat in my hallway for a good 10 minutes. The wind and rain were whipping the building and trees relentlessly. I cleaned up quickly and packed my backpack anticipating a quick escape if necessary. Cat food? check. Water? check. Flashlight? … flashlight? … where the heck are my D batteries?? Wallet? check. Cell phone? …. is it really almost out of juice? … argh! So much for emergency preparedness. Towel? check. Safari hat? check. Yeah, it seemed like a good idea at the time.

Once packed, I went around the entire house and unplugged everything, except one fan and my cell phone that was recharging. Exhausted, I lay in bed – sneakers and all. Chloe sat nestled in my arm oblivious to the non-airconditioned heat. Long story short, we made it through the night. Fitfully. The damage in my neighborhood wasn’t too bad. And we still had power, unlike many in Chicago — including my buddy Carol. So this morning bright and early I went over to pick up her three over-heated cats and bring them to the convent. Soon after Carol followed. Then it was off to work!

Now, it's after 8 p.m. My house guests — Carol, her three cats, and her Mac laptop are settled in and happy to have a cool, powered home to hang out in. As for me and Chloe, it’s time for bed. I have some much needed sleep to catch up on, and Chloe needs some loving since having house guests detracts attention away from her!

My prayers are with all those who are suffering in the aftermath of the storm.

Geez…glad to hear you’re OK, though. I miss a good storm. The west coast just doesn’t have storms like that. As a matter of fact, there were tornado warnings during my confirmation. I thought it was lovely.

I am thankful that you are well. Sounds like quite an adventure- exhilarating and awesome at the time, and a great source of reflection afterward. The majesty and power of things much larger than us… the tragedies for some and grace afforded others … a good storm can provide much food for thought … and water for food.

I have ridden my bike in a storm and find it kind of nerve racking. However, when I was riding my bike, I lived near Woodward and there was always so much traffic even in the worst weather.

What exactly were you planning to do with a safari hat, might I ask?

Honestly, I don’t know, Samantha! I was packing my backpack and saw it there and I thought it would be useful. No idea why.

It would have been funnier if you wore a habit AND a safari hat. Didn’t Mary Wickes do that in “The Trouble with Angels?”