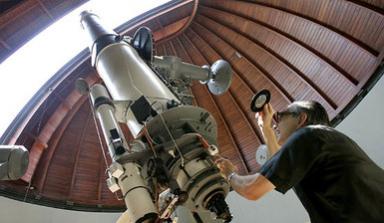 Argentine Jesuit Jose Funes has been appointed the new director of the Vatican Observatory. Funes is an astronomer and expert on disk galaxies. In searching the Internet for info on Funes, I came across Alan Elsner’s Weblog and his June 2, 2006, entry “My Story About the Vatican Observatory in Arizona.” Elsner says this about Funes:

Like all the priest-scientists, Funes said he kept his astronomy and religion separate. “When I teach at the University of Arizona, I tell students, ‘I am a priest, a Jesuit, but my class is a science class … and Science is about natural, not supernatural causes,’” he said. Funes, who heard a call from God when he was studying astronomy in college in his native Argentina, is mapping the formation and evolution of galaxies within 100 million light years of Earth. By the time the project is completed, he will have observed about 400 galaxies.

What I like about Funes and other religious men and women is the fact that ministry is wide-open. There are many different ways to serve God and the world. I think it is very cool that Funes is an astronomer. In my own congregation, we have sisters who are or have been city administrators, scientists, computer technicians, physicians, etc., in addition to the many in Church, pastoral care, and education related ministries.

jose is a witty astronomer. you’ll have stitches from laughing if you get the chance to sit and have dinner with him (smiles breaking…)

I took a class with Dr. Funes last semester and I have to say he is one of the most entertaining professeors i have been able to learn from. he has a way with letting the class know that even though he is a priest, he wants science to be the thing you learn from him. he is very funny and keps the class engaged which can be very difficult in a lecture hall full of 300+ freshmen who are hung over and sleep depraved.

So good to hear from people who’ve had the privilege of meeting Funes. Thanks for writing!