Pope Francis on the cult of money: we are not let off the golden hook

Prayer and Spirituality
By Sister Julie

I profess a vow of poverty and so I've often got money on the mind -- particularly in terms of living with a sense of the common good and care for those who are poor and vulnerable. As I've been reading Pope Francis's words on living in a "cult of money" I found myself agreeing and thinking about the world "out there." After all, with my aforementioned vow of poverty, there's no way I'd be in that cult of money! But is that really the case? 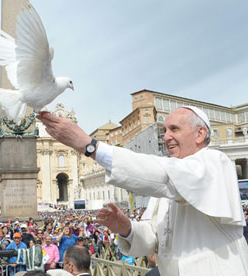 Many of us are problable in a similar boat where we don't have so many sheckles to rub together that would remotely constitute a cult. If we melted down our proverbial gold we might end up with a golden calf's hoof at best. Many of us would never identify ourselves in a cult of money -- if anything, a cult of no money! Yet I do not believe that we are let off the golden hook so easily. Pope Francis's words are meant for us as well because money, capitalism, consumerism, and power are very much a part of the culture in which we live.

Here are some of the aspects of this cult of money that Pope Francis mentions which give me pause:

Pope Francis' entire address can be found on the Vatican's website: Address of Pope Francis to the New Non-Resident Ambassadors to the Holy See: Kyrgyzstan, Antigua and Barbuda, Luxembourg and Botswana (May 16, 2013). All I can say is God bless the ambassadors who were at this audience and got a lot more than they may have expected!

What are some ways that the pope's message rings true in your daily life? What do you find challenging or heartening?