Some of the first feminists were Catholic Sisters and Nuns

Catholic? Feminist? That’s right. Catholic sisters and nuns were some of the first feminists in the U.S. and across the globe. 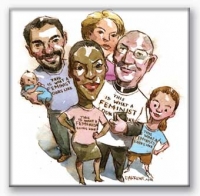 I just read an interesting post To “write women back into history,” include the first feminists: Women Religious by Linda Stamato, co-director of the Center for Negotiation and Conflict Resolution, and a member of the graduate faculty at the Edward J. Bloustein School of Planning and Public Policy at Rutgers University

Now before we go on here, let me clarify “feminist” because too often it is a word that is used to polarize and demonize women. As Megan Sweas, a young Catholic and feminist pointed out in an article she wrote last year for U.S. Catholic, feminists and feminism is often dismissed (usually with some amount of hostility, I might add) as “too radical, man-hating, or pro-choice”. I think she sums it up well and gives a good view of the challenges of and the connections between being both Catholic and feminist. I encourage you to read her article Catholic and feminist: You got a problem with that? (January 2009, Volume 74, Number 1; pages 23-25).

Roman Catholic Sisters built and managed hospitals, orphanages, and charitable institutions that served millions of people in America long before similar positions were open to women.  But Women’s History Month rarely mentions them or their contributions.  It’s time it did. The scope and quality of the institutions they created and sustained, and, indeed, their acts of mercy, manifest courage, conviction and selflessness, have been nothing short of extraordinary.

She goes on to mention some of the contributions of Catholic sisters and nuns which were detailed in Resolution 441 by U.S. House of Representatives. She writes of this resolution that it is “an action that applauds the social, cultural, and political contributions of Catholic Sisters in the United States, while at the same time recognizing that these women have led community lives dedicated to prayer and service, ‘fearlessly and often sacrificially committing their personal lives to teaching, healing, and social action.’”

Stamato also notes the traveling exhibit Women and Spirit: Catholic Sisters in America which celebrates the history of American Sisters in the Roman Catholic Church and was created by the Leadership Conference of Women Religious.

There are other great stories of Catholic sisters and nuns in her article. She concludes saying,

On the 30th Anniversary of Women’s History Month, can’t we give new and special meaning to the theme, “Writing Women Back into History,” and include the first feminists? They deserve the recognition, this month, and every month, for what they have given: selfless service to those in need of an education, health care, support and inspiration. And for what they continue to do, much as they have done since they began their work centuries earlier. Truly, these are women of history. It is their lives too, their work too, their exercise of leadership, their legacy and their continued works of charity, generosity, caring and mercy that this month should also seek to acknowledge and respect.

Wonderful blog today! I am always thrilled to read about women who have seen through the fake values of society and have had the courage of their convictions enough to stand up and speak out against them. Resolution 441 was especially enlightening and inspiring, and I am going to send copies to my friends and relatives who have the “what a waste” attitude towards sisters and nuns. I recommend that our young discerners who are having parental objections to their possible vocations, do the same. Thank you Sisters for your efforts to wake us all up. I am proud to know you and consider you my true friends.

All I have to say is Hallelujah Sister’s (and Sista’s)!

Thanks to Google Alert, I found your site and terrific blog. Thanks so much for liking my blog and giving me encouragement! Last night, in a brief encounter with the archbishop of Newark, NJ, at a dinner to celebrate Assumption College for Sisters (referenced in my blog) I was admonished to keep my praise to “authentic women religious.” To me, all women religious are authentic. And I was pleased to hear from you, Sister Julie, to let me know, this morning, how right I am.

I just found this blog and I love it! I often struggle with being both a feminist and a Catholic. How do I reconcile the two, in a Church that has a gendered hierarchy? But this is a good reminder that fantastic women have had an essential role in our Church, and still do.

No easy answers, Jen. Many of us share that same struggle. It helps to have good models, both women and men, who are intelligent and faithful and have prayerfully and carefully reflected on these issues.