Chapel of the Poor Clares of Montana 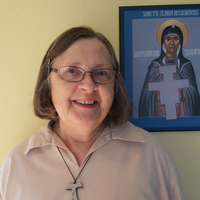 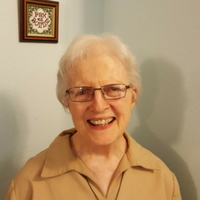 Left/Top: Sister Jane Sorenson, OSC, entered the Poor Clares in the Bronx, NY, in 1985. When sisters were being sought to begin a new foundation of Poor Clares in Montana, she volunteered. Sister Jane currently serves as the Abbess, and since 1999 has served as sacristan in the chapel. She initially was a member of the Sisters of St. Agnes, where she professed vows in 1967. She ministered as a teacher for a number of years before discerning a call to life as a Poor Clare.

Right/Bottom: Sister Catherine Cook, OSC, was born in Washington, D.C., and entered the Poor Clares at age 18. Prior to her arrival in Great Falls, Montana, to begin the new foundation, she lived in monasteries in Pennsylvania and New Jersey. She has discovered that life in the “Wild” West is very different from the East Coast and she has fallen in love with this mission territory. Sister Catherine has a passion for reading and enjoys baking, crocheting, gardening and crafts. She currently serves as the congregation’s secretary.

The Poor Clares of Montana are followers of St. Clare of Assisi living the gospel life in an enclosed, contemplative community.  Prayer and Community are the two mainstays of the life of the Poor Clares.  Therefore, to speak of prayer it is necessary to understand that a life of prayer is possible because of living a communal life with others who provide support and challenge.